My administration will not tolerate complacent and incompetent auditors - Akufo-Addo - MyJoyOnline.com

My administration will not tolerate complacent and incompetent auditors – Akufo-Addo 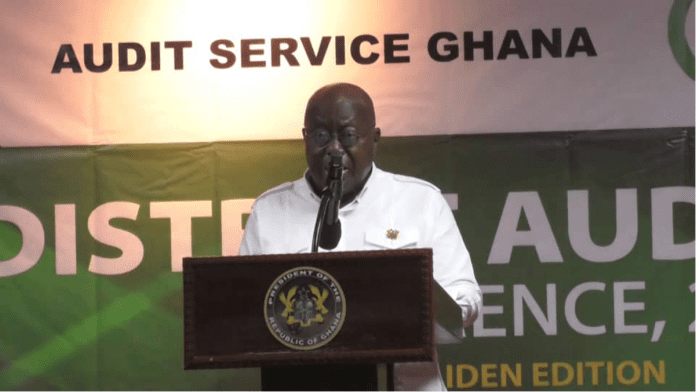 President Akufo-Addo says his administration will not tolerate auditors who are either complacent or incompetent.

He has charged Auditors in the various districts to efficiently execute their responsibilities in plugging leakages in the public purse.

“…It has become routine for the Auditor-General to uncover cases of financial malfeasance in the public service that will otherwise go unnoticed until they appear. As a result, we cannot avoid the conclusion that the district auditors must be either complacent or incompetent.

“We cannot afford to have auditors that will be complacent in the malfeasance they are expected to prevent, and certainly, we do not need incompetent auditors.”

The President was addressing the maiden edition of the District Auditors’ Conference in Kumasi under the theme,” Ensuring the Efficiency and Effectiveness of the State Auditor in a Digitised Economy”.

President Akufo-Addo is unhappy with cases of financial malfeasance consistently uncovered at the Public Accounts Committee.

He said the country cannot have either complacent or incompetent officers.

“Every time we hear details of the report of the Auditor-General and hearings of the Public Accounts Committee of Parliament, we know the district auditors are not working as they should”.

President Akufo-Addo emphasised that the fight against corruption can be effective if district auditors work as expected.

He says when such public officers are digitally literate, the fight will be won.

“…being digitally literate will now be a necessary element in the professional make-up of all auditors.

He continued, “…I came to this function to emphasise, for the avoidance of doubt, that the district auditor is one of the primary weapons in the fight for the protection of the public purse and the fight against corruption”.

Out of the 275 administrative districts, the Audit Service is located in only 76. But only 30 of them belong to the Service.

The Auditor-General, Mr Asiedu, revealed that their offices are either accommodated by the assemblies or in rented properties.

“…There is, therefore, no gainsaying that the service is in dire need of district offices and quite a number of them”.