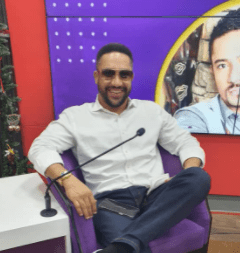 Award-winning actor, Majid Michel, who is now an Evangelist says his interest currently lies in acquiring knowledge about the things of God and not acting.

According to him, although one of his goals was to feature in Hollywood movies and be on set with Arnold Schwarzenegger and jump from helicopters, that has changed.

Speaking on Joy FM‘s The Reason is Jesus on Sunday, he stated that after being acquainted with the cast of “Think like a man”, he suddenly lost interest in pursuing his dreams in acting.

“Through that film, I got to meet all these people. I didn’t even take a picture with Kevin Hart. He wasn’t famous as at the time. Now I regret it. But I had a picture with Megan Good and the husband she recently split up with. I thought that was her bodyguard at the time.

“To me, it was where I wanted to be and after that, an interest in me just left. The interest just left me like that. It doesn’t mean it won’t come back. I was probably drawn back into the wilderness a little bit to recharge on something and come back.”

He told host, Fifi Folson, his interest in acting can be regenerated if need be, but currently, he is focused on the things of God and how to acquire the knowledge he needs.

“I can regenerate the interest if I want to but the interest for Hollywood, and doing all these movies I wanted to do with Arnold Schwarzenegger – jumping from the helicopters, the thrill has just left. It moved to knowledge in the things of God. It was a hunger for knowledge.

According to Majid, he has always known God all his life. “There was no turning point. Since I remember being aware in life, I have known God,” he added.

DISCLAIMER: The Views, Comments, Opinions, Contributions and Statements made by Readers and Contributors on this platform do not necessarily represent the views or policy of Multimedia Group Limited.
Tags:
Arnold Schwarzenegger
Hollywood
Majid Michel