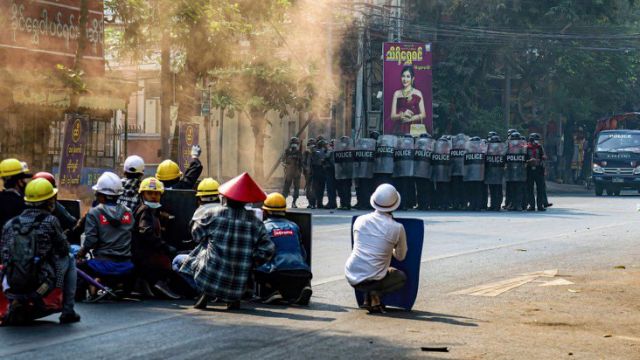 At least 38 people were killed in Myanmar on Wednesday in what the UN described as the “bloodiest day” since the coup took place a month ago.

UN envoy to Myanmar Christine Schraner Burgener said there was shocking footage coming out of the country.

Mass protests and acts of civil disobedience have been seen across Myanmar since the military seized power on 1 February.

Protesters have been calling for an end to military rule and the release of the country’s elected government leaders – including Aung San Suu Kyi – who were overthrown and detained in the coup.

The coup and the violent suppression of protests that followed have led to international condemnation, which Myanmar’s military has so far ignored.

Reacting to Wednesday’s deaths, the UK called for a United Nations Security Council meeting on Friday, while the US said it was considering further action against Myanmar’s military.

The latest violence comes a day after Myanmar’s neighbours urged the military to exercise restraint.

‘They just came out and started to shoot’

Ms Schraner Burgener said at least 50 people had now been killed “and many wounded” since the coup began.

She said one video clip showed police beating an unarmed volunteer medical crew. Another showed a protester being shot and probably killed on the street, she said.

“I asked some weapons experts and they could verify to me, it’s not clear but it seems that the police weapons like 9mm submachine guns, so live ammunition,” she said.

Reports from inside Myanmar spoke of security forces opening fire on large crowds in a number of cities, including Yangon, with little warning.

Two boys, aged 14 and 17, were among those who were killed, Save the Children said. A 19-year-old woman was also said to be among the dead.

At least six people were reportedly shot dead during a protest in Monywa in central Myanmar. At least 30 others were wounded in the unrest, a local journalist told Reuters.

A volunteer medic told AFP news agency in Myingyan that at least 10 people had been injured there. “They fired tear gas, rubber bullets and live rounds,” they said.

“They didn’t spray us with water cannon, [there was] no warning to disperse, they just fired their guns,” one protester in the city told Reuters.

In Mandalay, a student protester told the BBC that demonstrators were killed near her house.

“I think around 10am or 10.30, police and soldiers came to that area and then they started to shoot at civilians. They didn’t give any warning to the civilians.

“They just came out and they started to shoot. They used rubber bullets but they also used live bullets to kill civilians in a violent way.”

The military has not commented on the reported deaths.

As world powers view Myanmar’s crisis with growing unease, the country’s military said it was ready to withstand sanctions and isolation after its coup,

Ms Schraner Burgener has urged the UN to take “very strong measures” against the generals. The UN envoy warned of such punitive action in a conversation with Myanmar’s deputy military chief.

In response, “the answer was: ‘We have to learn to walk with only few friends’,” Ms Schraner Burgener told reporters in New York.

Nevertheless, more sanctions are being considered by Western countries, including the US.

Wednesday’s violence left the US “appalled”, State Department spokesman Ned Price said. He told reporters: “We call on all countries to speak with one voice to condemn the brutal violence by the Burmese military against its own people.”

He urged China, historically a close ally of Myanmar, to bring its influence to bear on the country’s military.

The UN Security Council – an international peacekeeping body – has voiced concern over the situation, but stopped short of condemning the coup because of opposition by Russia and China, who view the matter as an internal affair.

Meanwhile, Pope Francis called for dialogue to “prevail over repression”.

Sad news of bloody clashes and loss of life reach us from Myanmar. I appeal to the authorities involved that dialogue may prevail over repression, and ask the international community to ensure that the aspirations of the people of Myanmar are not stifled.

Foreign ministers of neighbouring South East Asian nations held a special meeting on Tuesday about the situation in Myanmar.

But although they urged restraint, only some of the ministers pressed the military junta to release Ms Suu Kyi.

Ms Suu Kyi, 75, was seen for the first time since her detention earlier this week when she appeared in court via video link.

But the military has provided no proof of these allegations – instead, it replaced the Election Commission and promised fresh polls in a year.

DISCLAIMER: The Views, Comments, Opinions, Contributions and Statements made by Readers and Contributors on this platform do not necessarily represent the views or policy of Multimedia Group Limited.
Tags:
Death
Myanmar
Protests