The news agency cites a written response from the Kremlin, but says it does not mention Kim Jong-un by name.

Yonhap quotes a Unification Ministry official as saying the reference to the leader could be ambiguous, as Kim Yong-nam is the nominal head of state.

Kim Jong-un has not made any overseas visits since taking power in North Korea in late 2011.

His first destination will been keenly watched for what it might indicate about his policies and strategy.

Foreign Minister Sergei Lavrov told journalists on 21 January that Russia had invited Mr Kim to the 9 May celebrations to mark the 70th anniversary of the end of World War Two.

He said that the "first signal was positive" from the North Korean government. 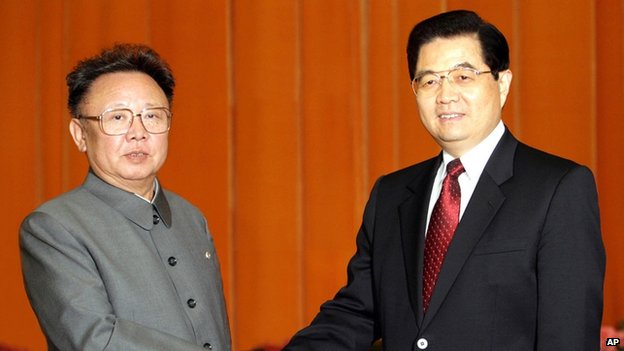 Late leader Kim Jong-il made rare overseas visits, but did not confirmed them ahead of departure

Yonhap news agency said the response from the Russian presidential office confirmed that North Korea's leader was among heads of state from 20 nations who had confirmed plans to attend.

But the response did not specify Kim Jong-un by name and said: "The list of attendees has not been finalised yet, as we continue a process of confirming the attendance of those invited," Yonhap reported.

There has been no statement from North Korea. Kim Yong-nam, whose official title is president of the Presidium of the Supreme People's Assembly, has more traditionally represented North Korea at overseas events.

Visits by Kim Jong-un's late father, Kim Jong-il, were never announced ahead of his departure.

The late Mr Kim visited Russia in August 2011, shortly before his death. But he paid more regular visits to China which, under his leadership, was seen as Pyongyang's closest ally.

If Kim Jong-un did choose to visit Moscow ahead of Beijing, the decision would be seen as significant – and as a snub to Chinese President Xi Jinping.

In recent years, China has come under pressure from Japan, South Korea and the US to exert more pressure on Pyongyang over its nuclear programme.

Beijing has, on some occasions, expressed exasperation with its northern neighbour via official media channels.

It also backed UN resolutions strengthening sanctions on Pyongyang after its recent missile and nuclear tests in 2013.