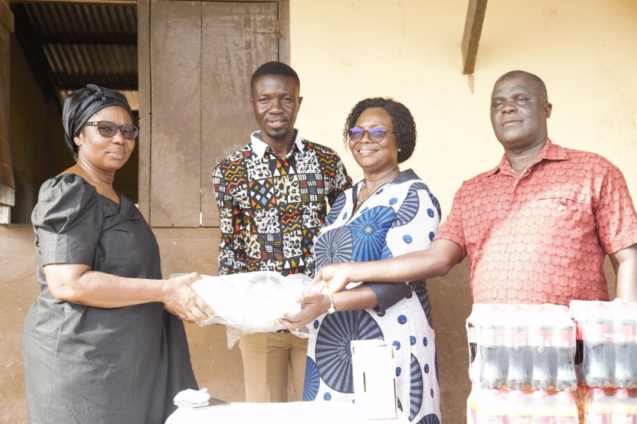 Nabrok Foundation has together with the Marian Yaba Foundation extended support to the Ebubonko M/A Basic School in Cape Coast.

The Foundation responded to an appeal by the school to have a section of the main school building reinforced against the threat of erosion.

Following the completion of the project, officials of the two Foundations visited the school to inspect the project.

As part of the gesture, they also donated a Digital Projector to aid ICT studies as well as assorted drinks for students and pupils to savor.

Executive Director of the Nabrok Foundation, Nana Abrokwa Asare, encouraged the students and pupils, explaining the benefits of hard work and dedication to excellence.

He promised that the foundation will donate a laptop computer each to the best performing male and female students in the next Basic School Certificate Examination (BECE).

“I want to encourage you all to take your studies seriously – knowing the importance of education. The education you acquire today is crucial to shaping you into a quality person that will benefit the cause of society and your individual families. I urge you therefore to commit yourselves wholly to studying hard to excel,” he said.

Executive Director for Marian Yaba Foundation praised the management of the school for reaching out to the Foundations for support and encouraged the students to develop and sustain the virtue of hard work and integrity.

She stressed the need for reliance on God for success – stating that it was God who had the power to make one great.

The Ebubonko M/A Basic School enjoys tremendous support from the Chief of the area Nana Kweku Ampah III who continues to invest significant resources into the school.

He has supported the school with ICT equipment, a library, ceiling fans and was recently responsible for tiling parts of the school.

The Nabrok Foundation continues to support varied causes around the country having made a mark in the Eastern Region where it first launched its support initiatives.

To mark the impending Easter festivities, the Foundation has planned a donation and support exercise for widows.

The gesture is expected to further symbolise the Foundation’s commitment to supporting the vulnerable in society.