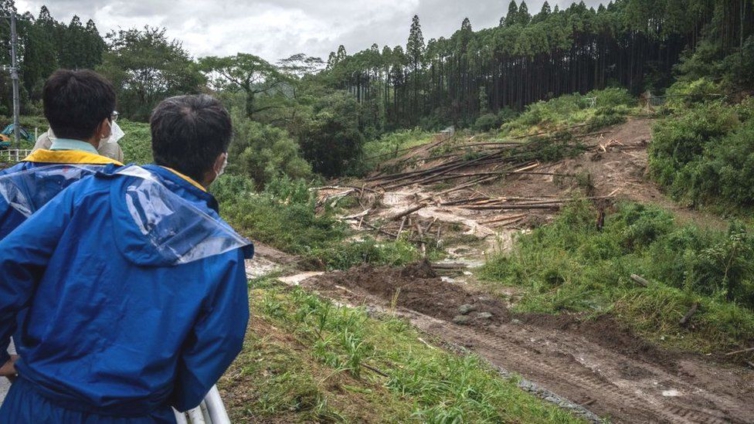 Workers survey the site of a landslide caused by Typhoon Nanmadol in Mimata, Miyazaki prefecture

Rescue workers in Japan have warned of mudslides and flooding as one of the biggest storms in recent decades batters the country.

Typhoon Nanmadol has killed at least two people and injured 90 others since it made landfall on the southernmost island of Kyushu on Sunday morning.

Nine million people have been told to evacuate, and more than 350,000 homes are without power.

State broadcaster NHK said one man was killed when his car was submerged in flooding, and another died after being buried in a landslide. One more person remains missing, and reports say 87 others have been injured.

The super typhoon brought gusts of up to 234km/h (145mph), destroying homes, and disrupting transport and businesses. It’s equivalent to a category four or five hurricane.

The capital, Tokyo, experienced heavy rain, with the Tozai underground line suspended because of flooding. Bullet train services, ferries, and hundreds of flights have been cancelled; shops and businesses have shut. Local video footage showed roofs ripped off of buildings and billboards toppled over.

Prime Minister Fumio Kishida delayed a visit to New York, where he is due to give speech at the UN General Assembly, until Tuesday, to monitor the storm’s impact.

The storm is forecast to turn east and pass over Japan’s main island of Honshu before moving out to sea by Wednesday.

Scientists have predicted an active hurricane season this year, influenced by a natural phenomenon known as La Niña.

Warmer sea surface temperatures in the Atlantic and Caribbean as a result of climate change may also impact the frequency and intensity of hurricanes.

DISCLAIMER: The Views, Comments, Opinions, Contributions and Statements made by Readers and Contributors on this platform do not necessarily represent the views or policy of Multimedia Group Limited.
Tags:
Flooding
Japan
Mudslides
Nanmadol