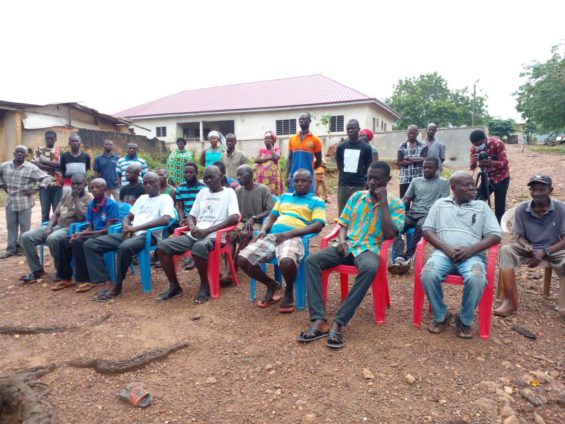 Government’s National Cocoa Rehabilitation Programme risks total collapse following an admission by some supervisors and cocoa farmers that the Programme is crumpling and needs to be rescued immediately.

The youth providing labour and technical support said heavy workload, delay in payment and lack of quality tools will put the Cocoa Rehabilitation Programme in limbo, as more youth are seriously reconsidering their participation in the programme.

“This poor approach is discouraging us from the Cocoa Rehabilitation Programme; managers of the programme do not have us at heart, they tell us what they don’t believe in their hearts,” the youth said.

This was disclosed during an interaction with members of the Ghana Agricultural and Rural Development Journalist Association (GARDJA) when they visited some communities in the Western North to ascertain challenges confronting cocoa production in the region.

Some of the communities visited include Ahwiaa, Suroano, Daboase, Manso Nkwanta, Adjakaa Manso, Ntrentreso and severely others.

Farmers said the discussion had been that the youth could find employment in Agriculture but often times the sector is being mismanaged, the very sector that could employ the majority of the youth of Ghana.

“Most of the youth in the region thought the Cocoa Rehabilitation Programme introduced by government would create employment opportunities for them instead people are brought from elsewhere to do work, how do we close the unemployment gap in our communities?” the farmers quizzed.

Secretary of the Sefwi Bekwai Cocoa Farmer’s Cooperative Union, Nicholas Kwabena Gbadago, explained that managers of the National Cocoa Rehabilitation Programme are killing the vision and mission behind the programme.

“The government has allocated over $200 million of the $600 million syndicated loan facility it secured from the African Development Bank (AfDB) to the national rehabilitation programme but it may not yield the needed results if not rescued immediately.

“We are losing our cocoa farms, this poor approach and strategy are discouraging us from joining the programme; which will lead to the further and rampant spread of the disease.

“We want to own the Cocoa Rehabilitation Programme introduced, just provide us the technical support, we will take care of our own farms,” he said.