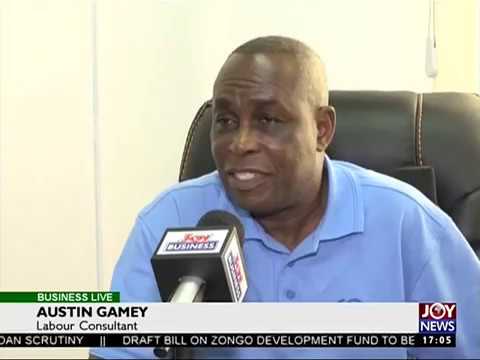 The National Labour Commission (NLC) has thrown out a petition filed by SGS/GCNet and labour consultant, Austin Gamey to review the September 4, 2020 Arbitration Award to the effect that redundant staff are entitled to and must be paid what the company’s HR Policy on redundancy has clearly stated.

In a response letter, the NLC noted ‘the Commission wants to advise that it has no power under the Law to review an Arbitration Award’.

The NLC cites Section 158 (1) of the Labour Act 2003 (Act 651) which provides that ‘the decision of the Arbitrator or majority of the Arbitrators shall constitute the Award and shall be binding on all parties.’

The letter reminded the petitioner that section 58 of the ADR Act 2010 (Act 798) clearly spells out the grounds and procedure for setting aside an Arbitration Award.

In turning down the petition for review, the letter firmly concluded “the Commission is unable to accede to your request’.

The dismissal of the petition by the NLC follows attempts by the SGS / GCNet and their Labour Consultant, Mr Gamey to turn the corner by the gross abuse of administrative process and absolute disregard for the Labour Act and Constitution.

The past week has seen the spotlight on SGS/GCNet refusing to comply with the September 4, 2020 Arbitration Award which prompted a sit down strike.

Labour analysts admonish that SGS / GCNet must do the needful to avoid further embarrassment on this fruitless journey to overturn the NLC decision and be firm in setting aside any imprudent counsel to delay the payment of redundancy which actions will cost them more.

Chairman of the Staff Welfare Association, Felix Agbodeka has stated affected staff are ready and determined to claim what is rightfully due each affected employee.

He warned that what is happening is undermining the morale of current staff who also are to be laid off by April 2020 and are concerned that they will be subjected to this inhumane treatment and injustice.

It will be recalled that sometime on April 29 2020, Government in a letter served notice of its decision to terminate GCNet TradeNet and Transit Service contract effective May 31, 2020.

The notice to affected staff came into effect from June 1, 2020, with the last day of employment for affected staff on June 30, 2020. Severance payments were to be made on or before that date.

Following a deadlock in discussions, the matter was jointly referred to the National Labour Commission (NLC) on August 11, 2020 by parties involved which ended in Arbitration for resolution.

An Arbitration Panel was jointly selected by the parties and the NLC. The parties selected one arbitrator each from the list of arbitrators and the NLC selected a Chairman to constitute the three-member panel.

On September 4, 2020, the NLC appointed Arbitration Panel ruled in favour of affected staff upholding HRPM Article 1901(f) of the GCNet HR Policy Manual to be respected without any variation or adjustment and also ordered that the effective date of redundancy was August 31, 2020 which should be regarded as the last day of employment for each employee, with clear instruction to pay August salaries to affected staff.

Days after Arbitration Award, GCNet Executive Management / SGS in its continued demonstration of acting in bad faith towards staff by breaching the agreement and total disregard for rights of staff refused to respect the ruling of the Arbitration Panel as backed by law (Labour Act and Constitution of Ghana) and rather in defiant posture approached the National Labour Commission (NLC) to review the arbitration award.