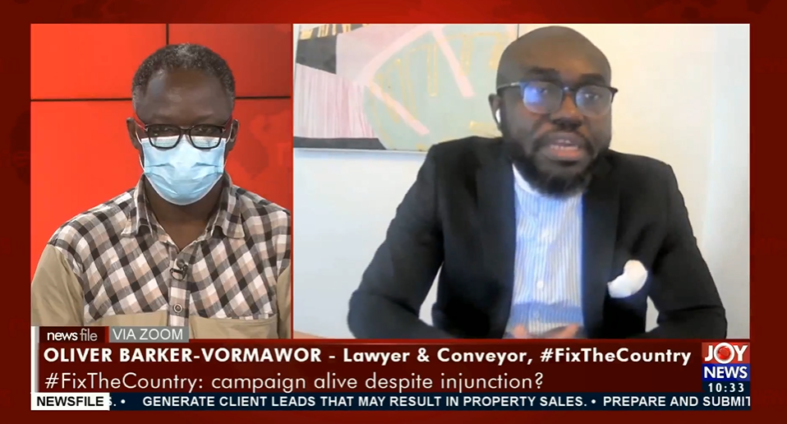 A convener of the #FixtheCountry movement, Oliver Barker-Vormawor has alleged that the National Security operatives are unlawfully monitoring the phone records of one of the prospective protesters.

This suspicion, he said, was triggered when the group were ‘tricked’ into a meeting with sector ministers – instead of the Inspector-General of Police (IGP) as they were earlier told – to discuss their planned demonstration.

The only Android phone members of the movement had on them at the National Security Ministry according to Mr. Vormawor, was cloned as calls to that particular phone number were being diverted to an unknown number registered by the name ‘ Monitoring.’

“When we left the meeting, we had credibly established that one of our representatives, the only person who was using an Android phone, his phone was cloned. And that all the messages and conversations we were having on our platform, he could no longer assess. So what we did was we flashed his phone immediately.

“We discovered just this morning, that calls from his phone were being diverted to another phone. When we searched for it online through True Caller, it’s called ‘Monitoring’ on Vodafone,” he said on JoyNews, Newsfile, Saturday.

He said the group will in the coming days put out the monitoring phone number online to name and shame and also demonstrate how unsafe, intolerable, and disrespectful members of the group have been treated even before they get to exercise their civic right of demonstrating.

Also on the show was Vice President of IMANI Africa, Kofi Bentil who, in an earlier submission lauded the effort of government in attempting to bring together an inter-ministerial panel to explore the group’s concerns in a dialogue yesterday.

He believes this is a far cry from the audience he received during the days of the ‘OccupytheflagstaffHouse’ movement in 2016.

However, Mr Barker-Vormawor was of a different view while describing the subsequent injunction secured by the police as an act of bad faith.

Meanwhile, Attorney General and Minister of Justice Godfred Yeboah Dame has downplayed the claims of illegal surveillance and challenged the group to produce evidence to support the allegation.

“There is no evidence at all to that effect and we should not really be encouraging such speculative and dangerous assumptions and assertions by certain people,” he said.