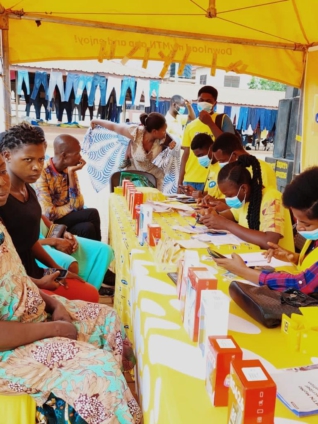 Eric Edem Agbana said this in an interview with Roselyn Felli on Prime Morning Tuesday, in the wake of NCA’s issuance of punitive measures to block all unregistered SIM cards effective September 30.

According to him, the registration for the Ghana card and SIM cards requires time and technical equipment; hence, the sector minister cannot issue punitive measures against users.

In addition, Edem Agbana indicated that it is unlawful for the government to block the SIM cards of Ghanaians.

“Ursula Owusu and the NCA do not have any power or mandate to issue or give out these punitive measures like blocking SIM cards.

“What they did in the last couple of days, where some people had their SIM cards blocked for 48 hours, some for 28 hours, and for 72 hours, is completely lawless, and we must take them on,” he said.

The Deputy NDC National Youth Organiser also cautioned that “they should be careful because we work with laws in this country.”

Earlier this year, the Bank of Ghana issued a directive that the Ghana Card shall be the only identification document to undertake transactions at all licensed financial institutions.

Mr Agbana revealed that some local banks do not enforce the use of Ghana cards.

According to him, bank transactions without the Ghana Card are optional.

He, however, applauded government for the SIM card re-registration but urged them to be lenient in the process.

“If after September 30, they still continue to block SIM cards, myself and other young Ghanaians and those who will be affected by the blockage will go to court and sue because we have the right to use our SIM cards,” he said.

Mr Agbana also called on affected people to speak out concerning the blockage of their SIM cards, saying it is unconstitutional for the government to issue such measures.

Meanwhile, he indicated his resolve to take legal action against NCA and the Communications Minister if SIM cards are blocked after the September 30, deadline.

DISCLAIMER: The Views, Comments, Opinions, Contributions and Statements made by Readers and Contributors on this platform do not necessarily represent the views or policy of Multimedia Group Limited.
Tags:
Edem Agbana
Joy Prime
Prime Morning
SIM Card Re-registration