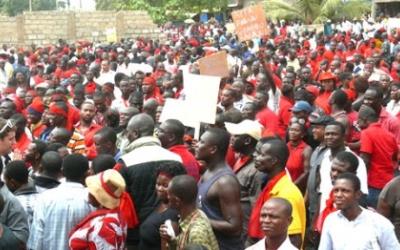 Some key members of the opposition National Democratic Congress (NDC), Friday, joined a protest against the UNIPASS system of operations at the Tema Port.

The protest held at the Tema port saw key players of the opposition NDC including the former Trades and Industry Minister under the erstwhile Mahama government, Ekow Spio Garbrah and member of Finance Committee in Parliament, Isaac Adongo, leading the delegation to protest against the system.

Speaking to JoyNews’ Kwesi Parker-Wilson who was the protest, the Freight Forwarders indicated that they were demonstrating against the system because it posed many challenges in their operations, therefore making life for them as fright forwarders unbearable.

“We are doing a manual system over here and we are even expected to deposit your transactions at least 48 hours before you even come back here to verify if it is being done or not but before then, it wasn’t so that is the reason why you come here and you see a pack of stakeholders around ,” an aggrieved Freight forwarder shared with JoyNews.

The Ghana Revenue Authority began using the integrated UNIPASS system at the Tema port and other entry points in April despite strong opposition against the new platform by some stakeholders in the import and export business as well as some civil society groups.

Stakeholders in the raised several concerns against the system indicating that it has posed various challenges, however, their complaints have been ignored.

This led to a protest, that has seem some key members of the NDC leading what it describes as a retrogressive system causing revenue loss to the state

Member of the Finance committee in Parliament and MP for Bolatanga Central Constituency, Isaac Adongo, urged the Freight Forwarders to fight and ensure that the right thing is done if indeed the system is not working in their favor.

“We have come here to give you a voice and when we go into the marina hall we want you to speak your mind this nonsense will stop,” he said.

DISCLAIMER: The Views, Comments, Opinions, Contributions and Statements made by Readers and Contributors on this platform do not necessarily represent the views or policy of Multimedia Group Limited.
Tags:
Freight Forwarders
NDC
Tema Port