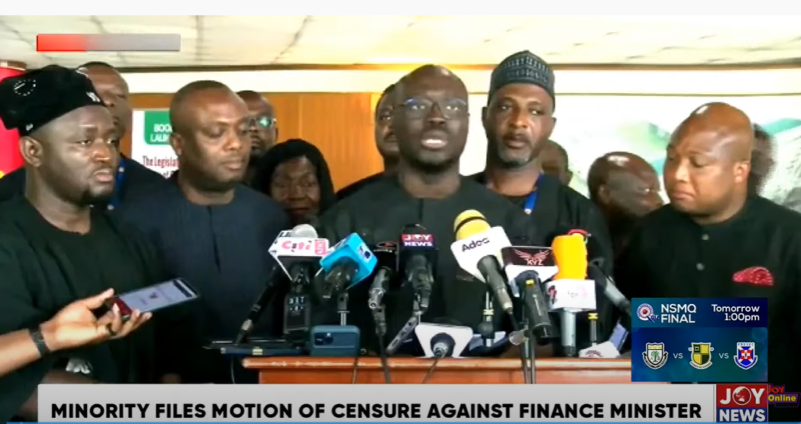 NDC MPs in Parliament have employed a basket of adjectives to fuel their demand for the dismissal of Finance Minister, Ken Ofori-Atta.

At a short press briefing on Tuesday, the Minority spokesperson on finance, Cassiel Ato Forson, spared no superlatives in painting the embattled Finance Minister, Ken Ofori-Atta, as ‘super incompetent’.

In expressing their grievances, the MPs wore black outfits to communicate their displeasure with the current state of the economy.

Here are the NDC’s adjectives-filled justifications for Ken Ofori-Atta’s removal, which was read at the presser in Parliament.

Despicable conflict of Interest ensuring that he directly benefits from Ghana’s economic woes as his companies receive commissions and other unethical contractual advantages, particularly from Ghana’s debt overhang.

Unconstitutional withdrawals from the Consolidated Fund in blatant contravention of Article 178 of the 1992 Constitution, supposedly for the construction of the President’s Cathedral:

Illegal payment of oil revenues into offshore accounts, in flagrant violation of Article 176 of the 1992 Constitution:

Deliberate and dishonest misreporting of economic data to Parliament 5. Fiscal recklessness leading to the crash of the Ghana Cedi which is currently the worst-performing currency in the world:

Alarming incompetence and frightening ineptitude, resulting in the collapse of the Ghanaian economy and an excruciating cost of living crisis;

Meanwhile, Deputy Minority Whip, Ahmed Ibrahim says his side has already filed a motion of censure against the Finance Minister, Ken Ofori-Atta.

The Banda Ahenkro MP said both Majority and Minority leaders have already commenced discussion about the vote of censure against Mr. Ofori-Atta.

The sentiments of the Minority came to bear after some New Patriotic Party (NPP) parliamentarians had earlier petitioned President Akufo-Addo to sack Finance Minister, Ken Ofori-Atta.

The MPs, numbering about 80, held a press conference on Tuesday to impress on the President to relieve his cousin of the responsibility of managing the national purse.

The MPs also threatened that they would withhold their support for government business in Parliament if their demands are not met.

They aggrieved legislators also want the Minister of State in charge of Finance at the Ministry of Finance, Charles Adu Boahen, to be subjected to a similar fate of dismissal.

DISCLAIMER: The Views, Comments, Opinions, Contributions and Statements made by Readers and Contributors on this platform do not necessarily represent the views or policy of Multimedia Group Limited.
Tags:
Akufo-Addo
Cassiel Ato Forson
Ken Ofori-Atta
NDC