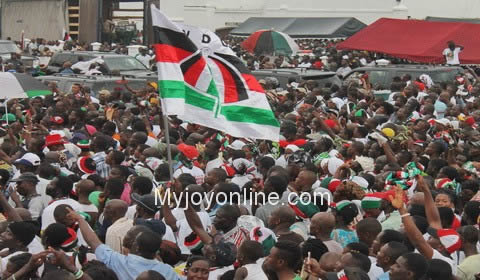 I have always been very proud of the heritage of the National Democratic Congress (NDC), and I shall always be.

The NDC has a strong and resilient spirit, and anybody who sits on the fence and believes that the NDC is about to implode will sit on the fence till the second coming of Christ.

I am sure the elephants are in a state of quandary wondering what it is that has made the NDC so solid in opposition even in spite of the heavy defeat the Party suffered at the 2016 polls.

Facts are facts, and there is no denying the fact that the 2016 defeat is the most horrendous that has hit the NDC since 1992.

However, the NDC has quickly and resolutely bounced out of the defeat and it is amazing how the Party continues to box the failing and faltering NPP Government into a tight corner.

Between the Party’s National Executives, the Minority in Parliament, the Party’s media personnel, and the foot soldiers, the NPP has been made to feel the NDC’s scorching heat and it is obvious that the ruling Party is really sweating and itching.

Indeed, is it not very invigorating that, it is after the defeat of the NDC that, the Party’s Ideological Institute has been formally set up?

The Ghana Institute of Social Democracy (GISD), was launched on the 10th of August this year (exactly 5 years after the burial of the late President John Evans Atta Mills), and the NDC is surely going to seize this great God-given opportunity to harness and reshape the energies of our teeming masses.

If the NDC was really dying under the heavy weight of the 2016 defeat, would the Party have had the energy to begin the first ever Party School in Ghana under the Fourth Republican Dispensation?

The fact that we have launched the Institute, is ample evidence of our collective resolve to do all we can to win back power in 2020 and continue to build a Better Ghana.

As I write this piece, the Party School is ready to roll out its first ever batches of one-day Programmes aimed at giving new and deeper meaning to the NDC’s running philosophy of Social Democracy and to also shape the energies of the teeming youth who have come under the NDC’s Umbrella.

I give lots of kudos to the late President John Evans Atta Mills and the late Professor Kofi Nyidevu Awoonor, for being the master brains behind the formation of the Party School to constantly and continuously educate members of the various strata of the Party.

During the days of the Revolution, Professor Awoonor was one of the major ideologues who was very instrumental in getting the cadres to imbibe the ethos of the Struggle.

After 25 years of existence, and having critical masses of Party supporters who were either not born 25 years ago, or were barely out of their cradle/diapers when the Party was formed; the setting up of the School will offer them great opportunities to visit the “Clearing House”, and clear all the doubts in their minds about the false propaganda that the NPP continues to churn out against the NDC.

Apart from the Party School; I am personally excited at the fact that the highest Advisory Body of the NDC, The Council of Elders, has been reconstituted and is working with the speed of lightning.

In the past one month, the Council of Elders has been meeting religiously every Tuesday morning at the Party’s Headquarters in Adabraka, and it is so exciting to see such Elders of the NDC meet and give solid guidance as regards the way forward for the Party.

I  have seen the Founder, President JJ Rawlings attend all the meeting that have been held thus far, and I am thrilled that our Founder has taken his rightful place amongst the Elders of the Party, and leading the way for reshaping and retooling the Umbrella for victory in 2020.

I salute Ahaji Mahama Iddrisu, the Vice Chairman of the Council of Elders, for the stoic manner in which he steers the affairs of the Council.

I also salute the likes of, Uncle Ato Awhoi, Obed Asamoah, Victor Gbeho, Alhaji Issifu Ali, Mrs. Anna Ennin, Right Honourable Edward Doe Adjaho, Dr. Christine Amoako-Nuamah, Mrs. Margret Clark Kwesie, Honourable Alban Bagbin, and all the other members of the Council who have taken the bull by the horn, and ensuring that the NDC quickly moves into the constituencies to deepen the healing and reconciliation processes that have already begun.

Three weeks ago, Alhaji Mahama Iddrissu signed a statement on behalf of the Council of Elders, calling on True party members to put a stop to letting loose their egos in the public.

Without wanting to curtail the freedom of speech of Party members, the Council of Elders did what is right, by showing leadership in the wake of a few individuals flaunting their egos to benefit of the NPP and its media lackeys/assigns.

Thanks be to God; in the aftermath of the admonishing of the Council of Elders, it has become clear that people have dropped their pens; and the heavy doses of “hate letters”, have stopped flying in all directions.

As I salute the Council of Elders for stamping its constitutional authority and calling for calm, I must also salute the “warring factions” for dropping their pens and sheathing their swords and allowing a fair modicum of open peace to prevail within the NDC.

In the last 3 weeks or so, the media has not had any meat from the NDC to chew on and pile-on more calories, and I cannot help thanking all members of the NDC for their sense of appreciation vis-à-vis the need to slow down on the open outbursts.

Indeed, every political party has Elders/Owners, and it is only right and proper that in the NDC, no person/s must be allowed to spit on the Council of Elders and get away with it.

Any person/s who dare show any form of disrespect to the Council of Elders must be dealt with swiftly and decisively.

No forms of INSUBORDINATION MUST BE TOLERATED!!!!

Indeed, the “never say die” spirit of the swarming foot soldiers across the length and breadth of the country, is most definitely, my strongest source of inspiration:  our foot soldiers are very determined and hell-bent on winning 2020, and we the Leaders dare not shirk our responsibilities of rolling up our sleeves and digging our fit into the mud.

When I said at the NPP’s Cape Coast Congress that “The NDC Is In A Comfortable To Win 2020”; it is precisely because I can see the strong desire to win 2020, fully etched on the faces of our determined foot soldiers.

It is fact that there has been some amount of open hostility amongst a few members of the NDC since the loss, but it has not doused the Party in flames of lasting inferno, and that is a firm attestation to the fact that the NDC is not about to atrophy!!!!

On a daily basis, the NPP gives us heavy ammunitions to hit at them via its GROSS FAILURES and maladministration and so we must direct our heavy artillery firepower at the FAILING AND LYING NPP Government, instead of hitting at ourselves internally.

Honestly, I am elated at the sublime fresh air blowing under the Umbrella and praying that greater and fresher air blows.

I rest my case for now and pray we can meet again under the shade-giving Umbrella same time next week.

So Sammy Awuku was going to send only NPP people to Russia to support the Black Stars huh?

So, in the event that the Black Stars qualify for the 2018 World Cup in Russia, only NPP members will be sent there with state funds huh?

Honestly, these NPP elephants never cease to amaze me with their animalistic lines of thought and speech.

How on earth can any reasonable person make such a loose and reckless statement?

Under President Atta Mills and President Mahama; did NPP people not go to South Africa and Brazil respectively under state sponsorship?

So, where from this nonsensical talk that only NPP people would be sponsored in the most unlikely event that the Black Stars qualify.

GOD is not asleep ooo!!!

No wonder the Black Stars are on the verge of not qualifying for the World Cup.

In the face of the NPP Government’s inability to fulfil its campaign promises, it is very obvious that Sammy Awuku and co are intending to use the qualification of the Black Stars to engage in extremely nauseating propaganda and create the impression that it is President Akufo-Addo who made it possible for them to qualify.

Of course, the criminal elements within the NPP have already taken “position”, to engage in visa racketeering and the extortion of monies from poor party foot soldiers under the guise of sending them to Russia from where they can cross over into Europe.

Now that the Blacks Stars are not about to qualify; and with the senseless promise of Sammy Awuku hitting a dead-end; Sammy should pray that the NPP youth do not go in search of “wormafunu” and “take position” around his house and beat him to pulp for falsely raising their hopes.