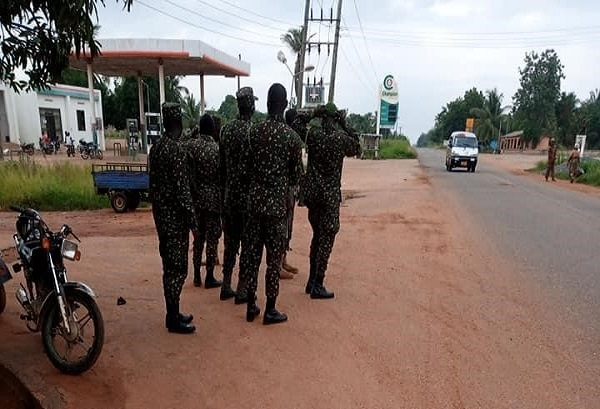 The Youth Wing of the National Democratic Congress (NDC) has served a strong-worded warning to security personnel deployed to the Volta Region to help enforce the President’s directive on the closure of the country’s borders to be minded in their dealings to avert any untoward scenes and disturbing reactions.

According to them, they have taken note of the alleged plot by the ruling NPP government led by President Akufo-Addo and the Electoral Commission chair, Jean Mensah to disenfranchise Ghanaians in the Volta Region by intimidating them with heavy military presence.

“For the avoidance of doubt, the residents of the Volta Region are also citizens of Ghana, who are enjoined by law to enjoy unfettered access to all public events and national exercises without any form of suppression, exemption or deceitful mechanisms to elbow their participation and active involvement.“

Their comments come on the back of an increased presence of military personnel in the Volta Region ahead of the new voters’ registration exercise yet to begin across the country.

According to some residents, security personnel in the area have deviated from ensuring the security of the border and are rather terrorizing them.

To this end, the NDC is calling on President Akufo-Addo and the Military hierarchy to quickly resolve these worrying developments or else “we shall employ very decisive and impactful mediums to enforce our collective advocacy and that of the interest of the good people of the Volta Region, and in all other places where such hostilities may be demonstrated by any individual or group of persons.”

In the statement signed by the National Youth Organiser of the NDC, George Opare Addo, taking precedent from the events of the ‘despicable’ Ayawaso West Wuogon by-election “if even one individual loses his/her life or is injured in the event of the registration process, the National Democratic Congress, NDC, and its YOUTH WING will respond fiercely and harshly to the perpetrator(s) of that assault whether acting under the guise of uniformed security or acting irresponsibly as an agent of this misled Akufo Addo Government.”

They added that, realizing from the events of the Ayawaso West Wuogon by-election, the Akufo-Addo led administration will let hooligans and members of the ‘invisible force’ allegedly enrolled in the Ghana Police Service to go unpunished for their wrong doings.

In this light, the NDC’s Youth Wing is directing people of the Volta Region to note the names of police personnel deployed in the area and to take pictures and videos in case of a scuffle between police and residents during the registration process.

“We will deal with such rogues of ‘invisible forces’ members enrolled into our security services at the appropriate time. The fact remains that no uniformed person can disqualify anyone from registering on his/her bogus suspicions.”

They concluded by sharing words of solidarity with Ghanaians in the Volta Region saying;

“To the People of the Volta Region across the country, the youth wing of the NDC stands with you against this naked ethnocentrism of systemic operations against you because of where you were born and who you were born to.”

DISCLAIMER: The Views, Comments, Opinions, Contributions and Statements made by Readers and Contributors on this platform do not necessarily represent the views or policy of Multimedia Group Limited.
Tags:
NDC Youth Wing
New Voters’ Register
Volta Region