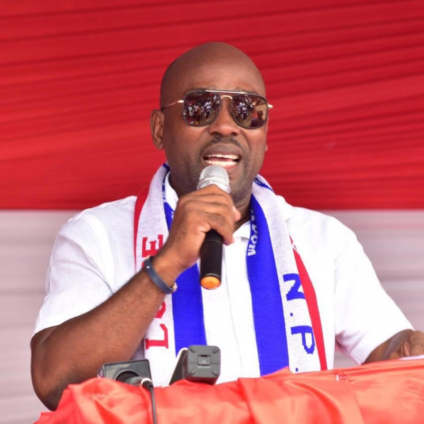 The New Patriotic Party has questioned what it described as continuous attempts by the opposition National Democratic Congress (NDC) to sacrifice the country’s security and patriotism for political gains.

According to the governing party, the NDC has been identified to be masterminding and mobilizing foreigners to register and take part in Ghana’s general elections.

Speaking at a press conference in Aflao, the Volta Regional Chairman of the NPP, Makafui Woanyah said: “the big question to ask is why the NDC is always determined to sacrifice our National Security and patriotism just to mobilize other nationals to participate in our internal politics and invest hugely in the mobilization of foreigners to register in this country of ours?”

He alleged that there was an increase in unapproved routes in the Ketu South Constituency from 43 to 150 in the course of the ongoing voter registration exercise, “making it practically difficult if not impossible for Immigration and other security services to monitor or control” the  Ghana-Togo South-Eastern borders.

Mr. Woanyah, however, disclosed that about 650 foreign nationals from Nigeria, Benin, Togo, Burkina Faso, and Ivory Coast have been arrested, adding that some of the illegal immigrants are facing prosecution while others have been deported to their respective countries.

Mr. Woanyah further stated that the current number of names registered onto the electoral roll in the Ketu South Constituency vindicates the NPP’s stance that the 2012 voters’ register was bloated with the names of foreigners.

“In 2016, there were 208 polling stations in Ketu South, and the total registered voters stood at 149,219 by 2019. Today, there are 254 polling stations and in spite of this coupled with the security lapses, the propaganda, mobilization and deliberate bussing of foreign Nationals across the Ghana-Togo border through the creation of 107 new unapproved routes we are now hovering around a total of 132,428 still less than 2012 and 2019 figures.”

“What the figures mean in real and practical terms is that, but for the compilation of this new Register, a Limited Registration would have added to the existing 149,219 and we would have been through the roof and hitting some 189,000 and above.”

He described the situation as “a vindication of our position and that of independent CSO, and International Election Monitoring bodies, that the 2012 Voters Register was over-bloated and not fit for purpose.”

Mr. Woanyah explained the NPP is more concerned about the compilation of a credible voters’ register not just to warrant free and fair elections, but to ensure there is adequate and reliable data to aid in planning, implementation of the country’s strategies, and resource mobilization and allocation.

Mr. Woanyah debunked alleged insecurity, intimidation, and harassment being peddled by the opposition NDC in the ongoing registration exercise in the Volta Region and indicated the exercise has been generally peaceful in the region. He, however, reckoned there were isolated cases at some centers.

He condemned what he described as tribal and ethnic politics by the NDC and implored people of the Volta Region and in the diaspora to “stop swallowing the dirty NDC propaganda and to disregard the ugly noises and tribal tirades”.

DISCLAIMER: The Views, Comments, Opinions, Contributions and Statements made by Readers and Contributors on this platform do not necessarily represent the views or policy of Multimedia Group Limited.
Tags:
Ketu South
Makafui Woanyah
Volta NPP
Voters Registration Exercise