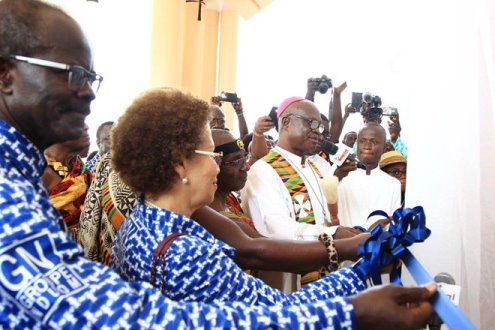 The Nduom School of Business and Technology (NSB&T) sited at Ayensudo in the Komenda-Edina-Eguafo-Abirem (KEEA) Municipality in the Central Region has been commissioned.

The university which sits on a 100-acre land has lecture halls, an administration block, a cafeteria, a library and an auditorium was officially opened for admission on December 6.

Vice Chancellor of the University, Dr. Papa Kwesi Nduom in his keynote address praised Groupe Nduom (GN) staff members for the diverse ways they have contributed to the success of the company.

He lauded Yorke Properties, a subsidiary of Groupe Nduom that enabled the Groupe to put up the University building for the architectural design for the school.

Dr Nduom disclosed that the entire NSB&T project was being tackled in three phases with the first phase being the commissioning and admission of first batch of students.

The second phase, he said would be the construction of hospital and an operation of an ambulance service which had been launched to operate in Accra and Elmina with other parts of the country joining soon.

Dr Nduom indicated that the third phase of the project would involve the introduction into the School’s curricular, a course on ethics to ensure that graduates from the university apply high ethical standards in their respective fields, adding that University would also have the GN Centre for Learning and Development for all Groupe Nduom staff members.

NSB&T is also expected to embark on good Christian Corporate Social Responsibility by giving 10 per cent scholarships for new entrants through GN Foundation plus internship for students annually at various Groupe Nduom subsidiaries.

Rector of the University, Prof. James Hawkins Ephraim, disclosed that the University was registered as Nduom University, but the accreditation requirements called for the name to be made Nduom School of Business and Technology.

He mentioned that more programmes including law would be added to the School’s curriculum in due course.

“The first phase which I call, a proclamation, will deliver first class education for effective leadership. The expansion of facilities will include a graduate school ultimately to create new knowledge for the betterment of Ghana”, Rector Ephriam declared.

Chiefs of Asebu, Okatakyi Dr. Amanfi VII, and his counterpart from Elmina, Nana Kodwo Conduah VI, in separate remarks eulogised Dr. Nduom and his staff members for putting up the University and believe the facility would impact positively on the lives of people in the Central Region.

They urged indigenes of the Region to take advantage of the numerous jobs created by Dr. Nduom in the area including the University to better their living conditions. Dedication was the University was done by the Metropolitan Arch Bishop of the Cape Coast Diocese of the Catholic Church, Rev. Mathias Nketsia.

Portions of the school land have also been earmarked for the construction of a teaching hospital for health and allied sciences programmes.

Communities in and around the catchment area are expected to benefit immensely from the facility; and that was evident on the day of opening.

Some residents of the adjoining communities engaged in brisk business activities.