Necessary sanctions will be meted out to officer at the center of the A&C Mall shooting incident - GAF - MyJoyOnline.com 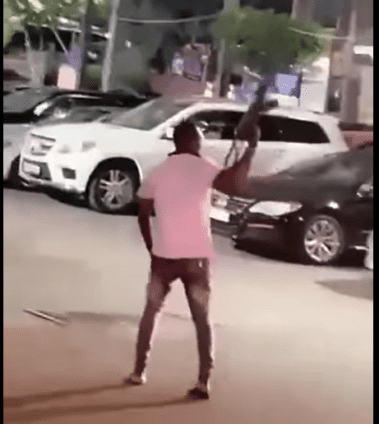 The Ghana Armed Force (GAF) has assured the general public that appropriate sanctions will be meted out to the Military officer at the center of the A&C Mall shooting incident if he is found culpable after investigations.

Speaking in an interview, the Acting Director of the Department of Public Relations of the Ghana Armed Forces, Commander Andy La-Anyane, said this will serve as a deterrent to other officers and prohibit them from conducting themselves in a similar manner.

“The Military High Command takes this particular incident seriously because it is unprofessional for a soldier to go to a public place and fire his rifle indiscriminately.

“So the Command is waiting for the outcome of the investigation by the military police and then the necessary sanctions will be applied to serve as a deterrent to others.”

On December 31, 2021, Flt. Sergeant Nicholas Owusu Frimpong was captured in a video firing an AK 47 several times into the air at the A&C Mall, East Legon, purportedly to welcome the New Year.

He was subsequently arrested. A press release on Monday, January 3, 2022, signed by the Director of Public Affairs, Supt. Alexander Kwaku Obeng said, “a collaboration between the Police and Military Police has led to the arrest of Flt. Sergeant Nicholas Owusu Frimpong in connection with the discharge of a firearm at A&C Mall, East Legon on Friday, December 31, 2021.”

This was after the Police, on Sunday, January 2, placed a ¢5,000 bounty for information leading to the arrest of the suspect.

In another statement, the Police said the action by the man is against Section 209 of the Criminal Offences Act 1960 (Act 29) which bars a person from discharging a firearm in public without lawful and necessary occasion.

The Bureau of Public Safety has also called for him to be handed over to the police for interrogation and prosecution.

The Executive Director of the Bureau, Nana Yaw Akwada, was of the view that the nature of the conduct under investigation should be dealt with by a competent court of jurisdiction and not through the internal disciplinary procedure of the Ghana Armed Forces since the suspect was not in uniform at the time the act was carried out and also there has not been an indication that he was on any assignment.

“So to that extent, we don’t know why he should be handed over to the GAF for internal action. This gentleman should rather be in the custody of the police for prosecution,” he told Citi News.

But the Acting Public Affairs Director of the Ghana Armed Forces, Commander Andy La-Anyane says Flt. Sgt. Frimpong will not be shielded in any way as the outcome of the investigations would be made public when completed.

“It ranges from a reduction in rank to even dismissal that is the highest. Nobody will be shielded,” he said, adding that the force has a duty and “a lot of disciplinary things that we can take up but I don’t want us to jump the gun.

“Let’s just finish with the investigations,” he added.