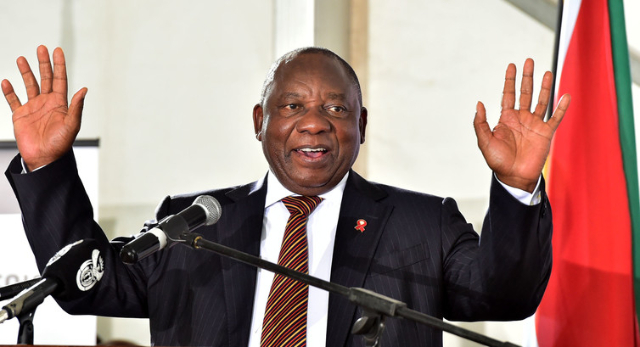 The new leader of South Africa’s African National Congress (ANC) Cyril Ramaphosa called for unity on Monday as factions within the party become increasingly divided over the future of President Jacob Zuma.

There is widespread speculation that Ramaphosa and his allies are lobbying ANC members to oust Zuma as head of state within weeks. Ramaphosa, who is also the country’s deputy president, publicly supports Zuma.

Zuma’s term doesn’t officially end until 2019 when national elections will be held but he could be removed early through a motion of no confidence in parliament or at meeting of the ANC’s national executive committee (NEC). The NEC will meet this week.

Zuma himself orchestrated the removal of former president Thabo Mbeki in 2008 once he had succeeded Mbeki as ANC leader.

Ramaphosa used Dlamini-Zuma’s own words as he called on the ANC to end its differences ahead of the 2019 vote.

“We must rid ourselves of factionalism. We do not want a divided African National Congress,” Ramaphosa told ANC leaders at a celebration of the party’s 106th birthday in Kwa-Zulu Natal, the home province of Zuma and Dlamini-Zuma.

“One of the things Comrade Nkosazana Dlamini-Zuma said was: ‘divided we fall, united we stand’. That has a great deal of meaning,” he said, as a stony-faced Dlamini-Zuma looked on.

Ramaphosa tried to balance the priorities of both factions within the ANC, reiterating his anti-graft stance but also blunting Dlamini-Zuma by pledging to redistribute land from the white-minority to the black-majority, her main campaign promise.

Though Ramaphosa says he supports land redistribution without compensations, a popular policy among poor black voters, he has promised he will not do it at the expense of the economy.

The ANC’s public support has declined under Zuma’s leadership as voters have become increasingly disillusioned with a raft of corruption scandals, weak economic growth and an unemployment rate that has risen to nearly 28 percent.

Many analysts say the 2019 election is the first realistic chance of the ANC losing power since the party swept to power under Nelson Mandela at the end of apartheid in 1994.