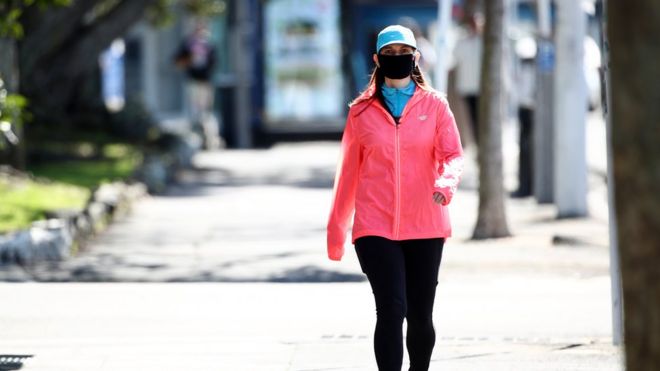 New Zealand has reported 14 new Covid-19 cases a day after its biggest city, Auckland, went back into lockdown.

The detection of four new infected family members earlier this week shocked a country that had recorded no locally transmitted cases for more than three months.

Of the new cases, 13 have been linked back to this family, while one is an overseas arrival who was in quarantine.

A three-day lockdown was imposed in Auckland on Wednesday.

“We can see the seriousness of the situation we are in,” Prime Minister Jacinda Ardern said in a news conference.

“It’s being dealt with in an urgent but calm and methodical way.”

All the confirmed cases will now go into quarantine, said officials. Some of their contacts may also be quarantined.

New Zealand has been internationally praised for its early response to the pandemic.

It has again moved swiftly to reimpose strict movement restrictions in Auckland and social distancing measures across the country.

Before Tuesday, New Zealand went 102 days without recording a locally transmitted case of Covid-19, one of the few countries to reach such a milestone.

Ms Ardern has also said she expects the outbreak to grow further before it slows down.

How did the virus re-emerge in New Zealand?

Health workers have been racing to find the origin of this latest cluster, testing family and work contacts of the newly infected.

The 13 new infections traced to four family members include:

Testing is being stepped up Rotorua, a spa town about 230km south-east of Auckland, which the family visited last weekend.

“We are working flat out to do the contact-tracing we need to do and trace back to find out what the source of this infection is,” national health chief Ashley Bloomfield told Newstalk ZB radio.

How unusual is the resurgence?

Other countries that had lifted Covid-19 lockdowns after seeing a drop in new cases have also seen infections rise again.

Vietnam recorded 99 days without any community transmission before a wave of new infections hit the central city of Da Nang in late July.

Researchers there are also searching for the source of the latest outbreak to help contain the disease.

Some health experts in New Zealand, like in Vietnam, have suggested that the virus may have been circulating in the community for several weeks before the new cases were detected.

There were now familiar pre-lockdown scenes in Auckland of people rushing to the supermarkets to stock up on food. Local media also reported others in the city waiting hours to be tested for the virus.

The spike in new cases has raised the possibility of an extended lockdown in the city, as New Zealand is just weeks away from a scheduled election.

Ms Ardern is due to announce next steps on the lockdown on Friday and a decision on the poll before Monday.

DISCLAIMER: The Views, Comments, Opinions, Contributions and Statements made by Readers and Contributors on this platform do not necessarily represent the views or policy of Multimedia Group Limited.
Tags:
Covid 19
New Zealand