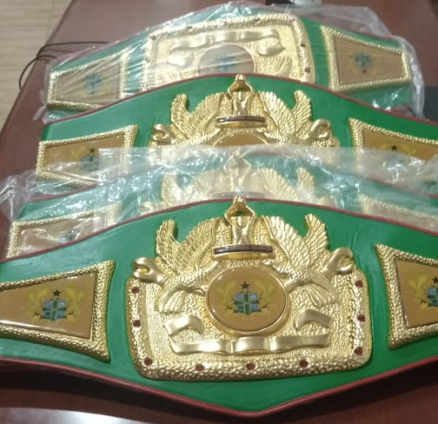 Ghanaian boxing champions will now be decorated with newly-designed belts beginning next month.

The Ghana Boxing Authority’s (GBA) Secretary General Patrick Johnson confirmed exclusively to Joy Sports that his outfit had taken delivery of 10 new belts to cater for the promotional needs of the calendar.

“We have ordered 5 more to complement the 10 we have already received. We will keep ordering some more till we have a good number to cater fully for our promotional needs,” he said.

This intervention comes after years of unavailability of title belts which always took something away from the promotions sanctioned by the Ghana Boxing Authority (GBA).

As of October 2021, they had only two title belts for all the active weight divisions between flyweight and welterweight.

Under this system, the national champions were decorated by the GBA immediately after the ring announcer’s results, after which they returned the titles immediately to be used for other events.

Joy Sports checks with the Ghana Boxing Authority indicate that at least 17 fight nights are put together every calendar year for the respective weight divisions.

Under the GBA’s rules and regulations every champion is supposed to stage a voluntary defence after a maximum of 90 days and a mandatory defence within a period of six months. As the situation stands all champions have hardly kept any title belts in their closets.

The standard practice internationally among the four major sanctioning bodies is to incorporate the cost of making the belt in the overall promotional budget.

The belts are made of green leather and have three compartments with bold gold plated casted designs on the main body.

On the main front there is an enlarged rectangular boundary which has eight red stones dotted around its boundaries.

In the center there is a bold imprint of the national coast of arms of Ghana. All the way at the top center of the big rectangle is a protruding image of a boxer carrying a round object.

Also casted on the middle are two eagles holding on to a central disc which has the coast of arms.

There is a meandering sash beneath the disc. Each of the eagles also has one boxing glove behind them. On either side of the center is a coat of arms on a rectangular surface.