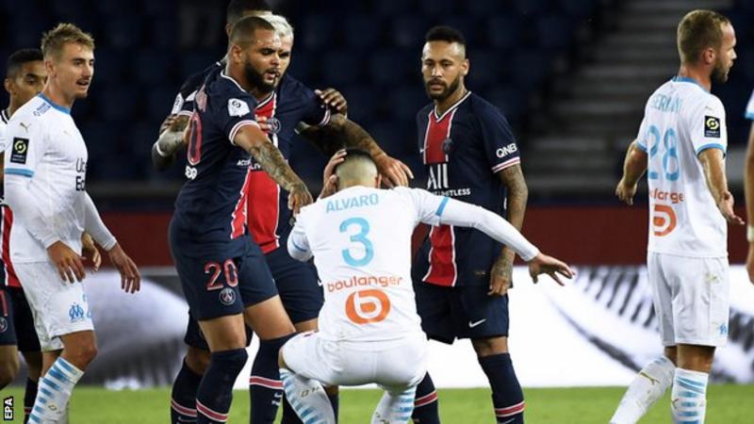 Neymar was one of five players sent off after an injury-time brawl as Marseille beat Paris St-Germain in Ligue 1.

Florian Thauvin scored the only goal as PSG lost their opening two Ligue 1 games for the first time since 1984-85.

The referee then watched a VAR replay of a Neymar punch and showed him a straight red card.

As he he left the pitch, the Brazilian told the fourth official he had heard a racist comment.

The game was fractious even before that late brawl. There were 17 cards shown in total, a record for a Ligue 1 game in the 21st century.

It all started when Marseille’s Benedetto nudged Paredes in the back, with the PSG midfielder then punching him to the ground before appearing to headbutt Alvaro.

A melee broke out, with Kurzawa and Amavi punching and kicking each other.

Benedetto and Paredes were each shown second yellow cards, with Kurzawa and Amavi shown straight reds.

A VAR review showed Neymar had punched the back of the head of Alvaro, a player he had been in a running battle with, and he was shown a straight red card – having earlier been booked.

Alvaro had also been involved in a big first-half flashpoint when he suggested Angel di Maria spat at him.

Di Maria was one of seven PSG players – along with Neymar – to test positive for coronavirus before the season started, although he had since provided a negative test.

DISCLAIMER: The Views, Comments, Opinions, Contributions and Statements made by Readers and Contributors on this platform do not necessarily represent the views or policy of Multimedia Group Limited.
Tags:
French Ligue 1
Ligue 1
Neymar
Olympique de Marseille
PSG