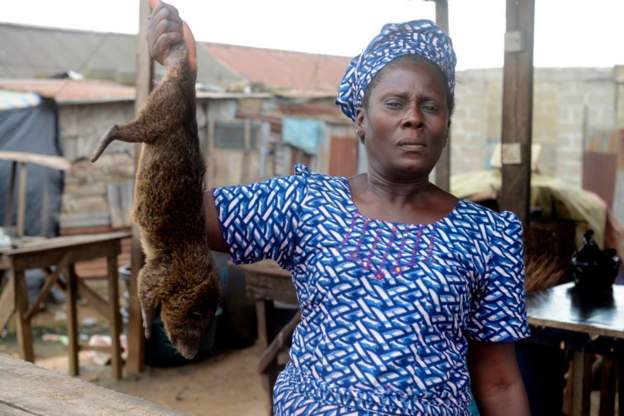 There is a big trade in bushmeat in Nigeria

The Nigeria government has banned the sale of bushmeat as a precaution to stop the spread of monkeypox.

It comes a few days after Nigeria’s Centre for Disease Control said that six cases had been detected this month, bringing to 21 the total number of confirmed infections this year, with one reported death of a person who had underlying conditions.

Monkeypox, a mild viral infection, is endemic in Nigeria and occurs mostly in remote areas, near tropical rainforests. The country has had sporadic cases since an outbreak in 2017.

The animals that can pass on the virus are infected rodents, including rats and squirrels. According to health experts, this can happen if you’re bitten or touch an infected animal.

Bushmeat refers to any wild animal that is killed for consumption, including antelopes, chimpanzees, fruit bats, rats, porcupines and snakes.

In some remote areas of Nigeria it is a necessary source of food – in others it has become a delicacy.

Nigerian epidemiologists say there is no evidence linking cases of monkeypox to eating bushmeat but the health authorities in the UK say it may be possible to catch it from the meat of an infected animal if not cooked thoroughly, and during preparation.

There are many bushmeat markets in Nigeria and it is unclear how the ban will be implemented.

The Ministry of Agriculture also directed vets and its other officials to increase surveillance aimed at detecting any possible cases of monkeypox in animals.

Operators of zoos, parks, conservation areas and recreational centres were reminded to make sure there was no contact between animals and humans.

DISCLAIMER: The Views, Comments, Opinions, Contributions and Statements made by Readers and Contributors on this platform do not necessarily represent the views or policy of Multimedia Group Limited.
Tags:
bushmeat
Monkeypox virus
Nigeria