With more than half of Nigeria's 36 states declared, Gen Buhari's All Progressives Congress (APC) is ahead by half a million votes.

A victory for Gen Buhari would make President Jonathan the first incumbent to lose an election in Nigeria.

Correspondents say it is likely the loser will allege foul play.

More than 800 people were killed in protests after Mr Jonathan beat Gen Buhari in the previous election.

Gen Buhari's lead was cut from two million votes, after Mr Jonathan gained a landslide in Rivers State, where there have been widespread reports of irregularities and a curfew imposed.

Electoral commission (Inec) chairman, Attahiru Jega, said the fact-finding team sent to the state found there were some voting irregularities with the poll but not enough "to warrant a cancellation of the election".

However, many of the states still to declare are in the north, where Gen Buhari is seen as favourite.

Earlier, the announcement of results was disrupted when an agent of Mr Jonathan's People's Democratic Party (PDP) launched a tirade against Mr Jega in Abuja.

"We have lost confidence in what you're doing, we don't believe in you any more," Elder Orubebe said.

Rejecting the allegation, Mr Jega replied: "Let us be careful about what we say or do and let us not dispute a process that has begun peacefully." 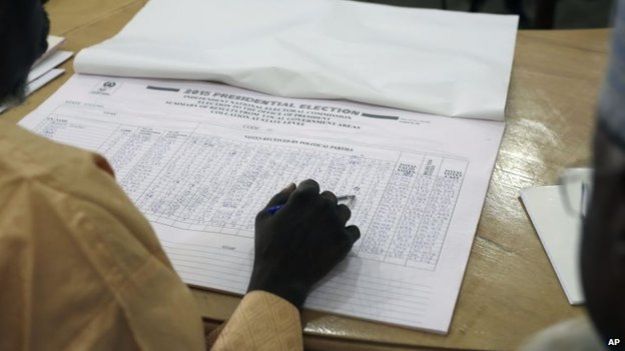 Almost half of Nigeria's states have yet to declare their results

Gen Buhari has won the two biggest states, Lagos in the south and Kano in the north, while Mr Jonathan won a huge majority in his home state of Bayelsa, as well as Rivers.

The candidate with the most votes will only avoid a run-off if they gain at least 25% of the votes in two-thirds of Nigeria's 36 states.

International observers have broadly praised the conduct of the vote but there has been some concern over possible efforts to rig the outcome during the count.

The US and UK have expressed their concerns over potential "political interference" during the count.

A spokesman from Inec dismissed these fears, saying that "there is absolutely no basis" to talk of meddling.

Authorities in Rivers State announced a curfew on Monday night after protests over alleged vote rigging.

Earlier, police in the state used teargas against female opposition protesters who were attempting to lodge complaints with election officials.

Voting spilled into Sunday in some parts of Nigeria after problems were encountered with new electronic card readers, which were introduced to prevent fraud.

President Jonathan, whose PDP has dominated Nigerian politics since 1999, was among those whose registration to vote was delayed by the technology.

Mr Jega said only a fraction of the 150,000 card readers being used nationwide had failed.

The UN gave an upbeat assessment of the vote on Sunday, with Secretary General Ban Ki-moon praising the "determination and resilience" of voters, despite the reports of attacks by Boko Haram militants and others.

The National Human Rights Commission said 50 people were killed during the balloting.

The presidential and parliamentary elections had been delayed by six weeks because of the insurgency by Boko Haram. 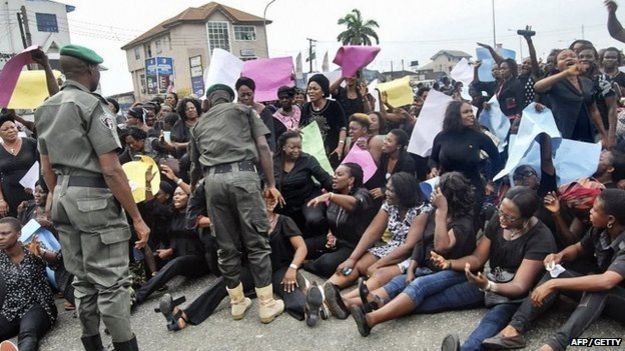 The Islamists attacked polling stations in north-eastern states, with a curfew declared in Bauchi State after fighting between the security forces and the group.

As well as a president, voters are electing members of the house of representatives and the senate.