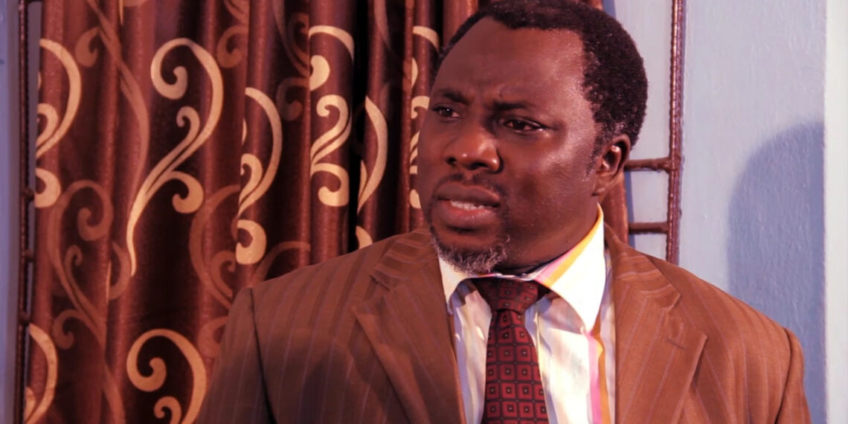 Eight months after Oxlade’s sex tape leaked and Harrysong opened up on a six-year-old sex tape, famous actor Raphael Niyi Olukomogbon has sought sympathy from the public after a blackmailer came for him.

In a video circulating on the internet, the actor alleged that a blackmailer claimed to have a nude video of him and is threatening to post it on social media.

The actor, who studied Performing Arts at the University of Ilorin, said the blackmailer has been threatening to go online with his nudes if he doesn’t give him “something.”

He said that “for like three days now or thereabout, he has been threatening, sending messages, threatening to go online if I don’t give him something. I will not give in to blackmail.

“I have told him to go ahead. A couple of friends already spoke with me, and I want to thank them for standing by me and sending words of encouragement.”

He further noted that he informed his wife and family members of the unfortunate occurrence noting that he will not give in to such blackmail.

Raphael Niyi added that “I do videos if by an act of commission or omission you happen to get my nude and you are now saying you want money with it, it is not going to happen with me. I am also working on him but I want you all to be alert when this thing happens.”

Speaking more on the blackmailer, Niyi stated that people do anything to get money.

However, he informed the male blackmailer that he would not indulge him by giving him a dime.

“If you want to post anything, post it. In my line of work, anything can happen. I do videos, and I make calls. I do all that. If by an act of commission, you happen to get my nude, and you are now saying you want money for it, I don’t think it will happen with me.

It is not the first time a Nigerian entertainer of repute has been blackmailed.

Others who have been victims of such blackmails and have called the aggressors’ bluff include veteran singer Salawa Abeni, OAP and actress Toke Makinwa and singer Tiwa Savage.

In all the aforementioned cases, the victims preempted the blackmailers and went ahead to release the materials.

In April 2020, Abeni, known as the ‘Queen of Waka Music’, released her nude pictures after being threatened by an unknown Nigerian.

According to the 58-year-old music legend, the blackmailer threatened to tarnish her image and destroy her career of over 45 years.

She, however, decided to share her nude pictures on Instagram and screenshots of her chat with the blackmailer.

Days later, OAP, Toke Makinwa, announced that she was being blackmailed with ‘photoshopped’ nude photos.

The actress said she wouldn’t succumb to the threats by the scammer and then went ahead to share the blackmail materials on Instagram.

In October 2021, famous singer Tiwa Savage revealed in an interview with American OAP, Angie Martinez, that she was being blackmailed by an unknown person who threatened to release a sex tape that featured her and her current lover.

The singer hinted that the blackmailer sent the sex video of herself and her current date to her team, demanding money.

Days later, the intimate video found its way to the internet.

The actor is best known for his role in the popular television series, ‘Awon Aladun De’.

He has been featured in several tv series, including ‘Shadows’, ‘Crack in the Wall’, ‘Burning Spear’, ‘Tales of Eve’, ‘Family Ties’, ‘Face 2 Face’, ‘Yard Tiles’ and many others.

Niyi has also done a couple of productions in English, Hausa and Yoruba.

DISCLAIMER: The Views, Comments, Opinions, Contributions and Statements made by Readers and Contributors on this platform do not necessarily represent the views or policy of Multimedia Group Limited.
Tags:
nudes
Oxlade
Raphael Niyi
sex tape
Tiwa Savage