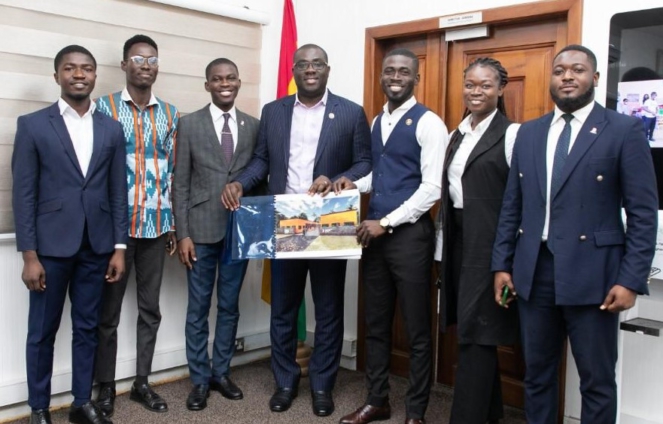 Photo of NUGS leadership and the Director-General of NLA, Sammi Awuku

The National Lottery Authority (NLA) has expressed its readiness to support the National Union of Ghana Students (NUGS) to construct a six-unit classroom block in the Kanania community of the Kassena Nankana West District.

The Union has announced its intention to embark on similar projects in deprived communities that need critical educational support and attention.

Speaking during a visit to the Authority, the President of NUGS, Dennis Appiah Larbi-Ampofo, explained that the Union has instituted measures to mobilise funds to execute the Kanania project.

According to him, “student unions are huge organisations that must not limit themselves to only advocacy and mounting pressure but must be able to, as part of positive advocacy, initiate projects in areas they believe need attention.”

Dennis Larbi-Ampofo added that NUGS, in partnership with Airtel/Tigo and other groups, are developing innovative ways to generate funds for the current project and subsequent ones.

In his remarks, the Director-General of NLA, Sammi Awuku, commended the leadership of NUGS and expressed the support of the Authority towards the project.

“I am glad that young people are taking charge, not only for power but for development.

“This is something the Authority is happy to be a part of,” he stated.

He assured the leadership of NUGS that NLA will go the extra mile in supporting the union to accomplish the initiative.

The NUGS Basic School Project is a student-led initiative aimed at building basic schools to support deprived communities across the country.

It is anticipated that NLA, through the Good Causes Foundation – which has been involved in some huge developmental projects in recent times – will provide financial assistance to NUGS towards this project.