No legs, no issue: Farmer makes the most of his gifts - MyJoyOnline.com

No legs, no issue: Farmer makes the most of his gifts 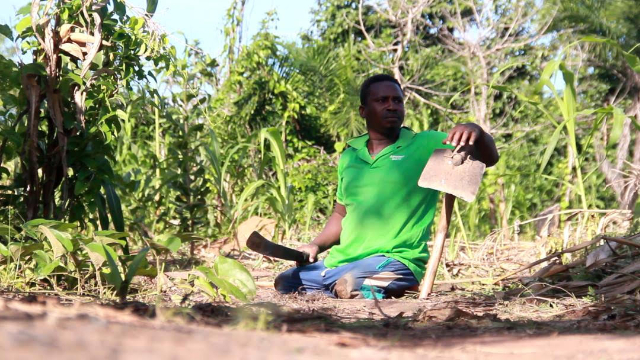 Kwasi Kumbepueru is a 33-year-old farmer at Miawani in Kintampo North District of Bono East Region.

Though physically challenged, he braces all storms, with great attitude, to perform every task on his farm.

Kwasi was born a normal baby but became physically challenged at a tender age due to what he says are family issues he would want to keep private.

For him, he believes, nothing should stop him from getting things done to achieve his aspirations.

He rides a small motorbike for ten minutes to get to his 37-acre farm daily to attend to his crops.

Kwasi Kumbepueru on his motorbike on his way to his farm.

Kwasi then spends about 30 minutes to inspect three traps he has set for game.

His targets are squirrels, bush rabbits, rats, and wild guinea fowls which provide good food for the family whenever he is lucky to have a good hunt.

The sight of Kwasi busy at work, leaves one wondering if there is anything he cannot do.

Kwesi is a great example of a person who is making the most of his gifts. His positive attitude, courage and work ethic make him a true inspiration.

Averagely, he makes GHS10, 000 each good farming season, besides what he feeds his family with.

He gets support from farmhands that he employs.

In bad seasons when the weather fails, like other farmers, Kwasi suffers poor yield and consequently, a drop in income.

Besides farming, Kwasi is five in a fold – he is a mechanic, butcher, pub operator and cobbler.

He doesn’t need a second person to check and service his broken down motorbike, cobble defective footwear or slaughter and dress an animal for food.

Unfortunately, why Kwasi dropped-out of school is hard to explain.

“I can’t tell why I left the four corners of the classroom” he says, but he recounts he could not cope with classroom work so easily.

It however didn’t push him to join hundreds of others like him who resort to begging on the streets.

Kwasi sometimes regrets his condition, especially, when he remembers his hey-days or sees his colleagues actively walking and enjoying themselves.

“It pains me when I have to only sit and look at them. It is painful,” he laments.

Events at which people dance and have fun are no-go area for Kwasi.

“Some of my friends would be dancing and wriggling their waist but I only have to sit quietly and watch,” he recalls.

He says, “I am ready to help anyone who wants to venture into farming.”

The native of of Jirapa in Upper West Region, is married with two children, a male and a female.

Kwasi has lived at Miawani for the past fifteen years, having migrated at the age of 18.

Many village folks admire Kwasi for his energy and hard work. In fact, they see him as a legend.

“You will marvel how he pays attention to his work. He doesn’t and wouldn’t give up,” one of the village folks says.