No livestock disease in Ningo-Prampram - District Director of Agriculture - MyJoyOnline.com

No livestock disease in Ningo-Prampram – District Director of Agriculture 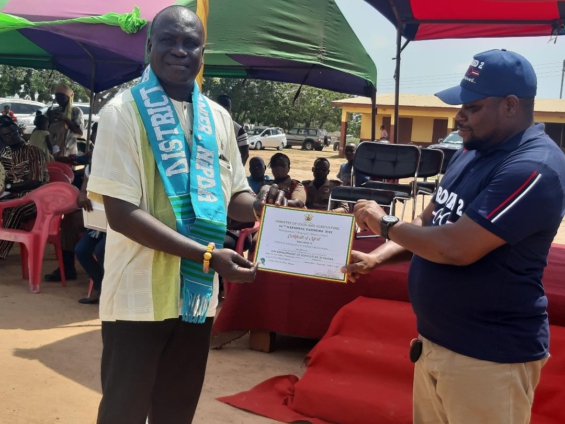 Livestock farmers in the Ningo-Prampram District have recorded zero livestock disease in 2020.

This is according to the acting District Director of Agriculture at Ningo-Prampram, Prince Ofori-Boateng.

He said this during the district’s observation of the 36th National Farmers’ Day which was on the theme: “Enhancing Agribusiness Development under Covid-19 challenges and opportunities”.

Mr. Ofori-Boateng stated that “the district was not hit by any livestock disease out-break during the year under review due to proper surveillance and timely prophylactic measures put in place by the Department”.

On crops, he revealed that the district saw less harm to crops by the Fall Armyworm which he attributed to regular control measures carried out during the period and the regular supply of pesticides from the Regional Agricultural Development Office to farmers.

“An estimation of 650 acres were affected by the Fall Army Worm for the period out of which 645 acres were recovered, and five acres completely destroyed, ” he stated, indicating that in 2019, the worm destroyed about 65 acres of crops in the District.

Ningo-Prampram District Chief Executive, Jonathan Teye Doku, in delivering the keynote address said the government had demonstrated that it was very interested in Agriculture hence the introduction of some flagship programmes including Planting for Export and Development, Planting for Food and Jobs, and Rearing for Food and jobs.

Commending farmers and fisherfolks for feeding the country and contributing greatly to the economy, he urged Ghanaians to patronize food produced in Ghana in order to create job opportunities for citizens and raise income for the farmers.

He also appealed to traditional leaders and family houses not to sell all the arable lands to house developers as doing so would have a devastating effect on agriculture in the district.

He lamented that the lands at the Dawhenya irrigation site had been heavily encroached upon with some developers willing to reclaim the dam for building purposes.

59-year-old Mr. Joseph Nii Armah Quaye, who is the National President of Ghana Inshore Fisheries Association, was declared the Ningo-Prampram District Best Farmer after venturing into farming four years ago.

For his prize, he received a wax print, fridge, television, cutlasses, wheelbarrow, sprayer, watering can, and bicycle among others.