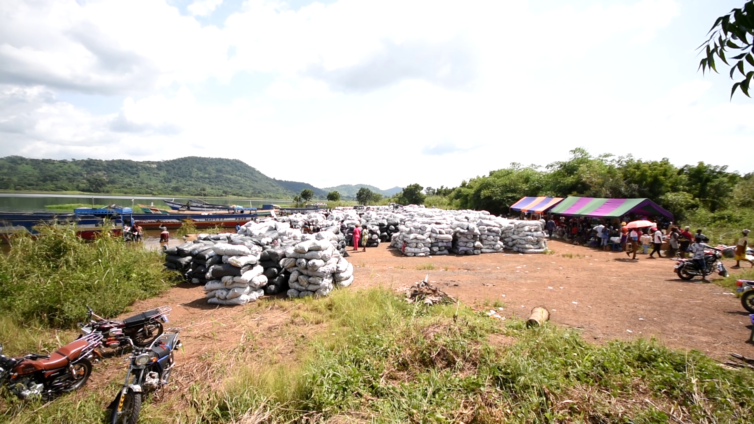 The authorities of North Dayi District Assembly in the Volta Region have undertaken an initiative aimed at promoting the socio-economic growth of the District.

The Assembly, under the leadership of the District Chief Executive, Edmund Kudjo Atta, aims to create satellite markets at vantage locations among other projects.

The North Dayi District harbours one of the least economically active populations in the Volta Region.

The agrarian district which has only one commercially viable market lacks enough jobs for the teeming youth.

Nonetheless, the District Assembly is scheming to change the narrative by establishing satellite markets to propel the growth of the local economy, while other alternatives are being considered.

In this regard, the Assembly is supporting an initiative by locals to establish the first satellite market at the Aveme Dayigba along the Volta Lake.

“Premix fuel is expensive these days so we spend more money transporting goods to Gemeni. Some boats experience fuel shortages during their journeys leading to accidents.

So we decided to settle here. The location is suitable for a natural harbour, the middlemen also like the place.”, said Louis Acolatse, an Opinion Leader.

Mr. Kudjo Atta, together with a team from the Assembly visited the market to map out a plan to develop it into a more befitting trading Centre.

The Assembly is hoping to provide shades, a warehouse, sanitary facilities, utilities and other ancillary facilities.

Mr. Atta said the initiative is geared towards performing the task of local economic development to create jobs and increase their income level.

“We will look for money, we have various sources of funding and we will go into that and make sure that we have money for this particular project” he said.

He outlined the significance of the project and promised to employ all means possible to see to the development of the market, which he believes would have a replicate effect on the revenue mobilization efforts of the Assembly in the future.

He is optimistic that the market, when fully established, would contribute to improve the livelihoods of residents who would have the opportunity to engage in economic activities.

The market is envisioned to be a transit point for charcoal, food crops and fish products from the Afram Plains and other riverine communities.

Some of the middlemen shared their excitement about the initiative indicating the location of the new market would favor their trading activities considering the nature of the road and their relation with the wholesalers.

“They have established a new market at Aveme, this is where we buy charcoal. The road is good, the traders also treat us well but they must consider the pricing of the goods”, said Winfred Kafui Saba, a middleman.

Already, residents have started benefiting from the initiative by engaging in economic activities, which would enable them earn some money to fend for themselves and their families.

“We are excited about the location of the market here. Trading activities are taking place and the market is quite busy. We thank those who brought the market here”, said Richard, a native.

The North Dayi District Assembly is hoping to create more satellite markets to provide an avenue for trading and create jobs to promote the growth of the local economy and enhance livelihoods.

DISCLAIMER: The Views, Comments, Opinions, Contributions and Statements made by Readers and Contributors on this platform do not necessarily represent the views or policy of Multimedia Group Limited.
Tags:
Kudjo Atta
North Dayi District
Volta Region