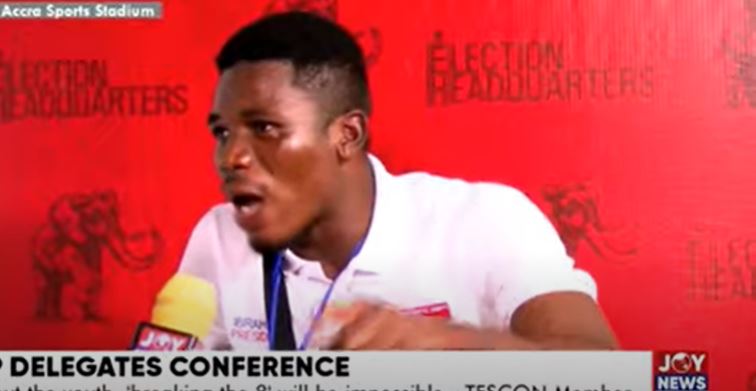 Tertiary Students Confederacy (TESCON) proxy voters numbering about 291 members have been barred from casting their vote in the 2022 NPP National Delegates Conference.

This is the result of an injunction that was served on them.

This was made known to the delegates on Saturday by the Chairman of the Election Committee of the NPP, Peter Mac Manu.

“Our TESCON delegates and local proxy voters numbering 15 and 291 will not be able to cast their votes because there is an injunction. We received the injunction last night,” he said.

Reacting to this, some TESCON delegates who spoke to MyJoyOnline.com expressed their reservations with the directive.

One of the disgruntled delegates, Ibrahim Samsideen, who is the TESCON President of the Community Health Nursing and Midwifery Training College in Tanoso said he is ‘disappointed’ at the turn of events.

“I’ll just say that I’m very very much disappointed. For someone to travel all the way from Ahafo Region, not only me, [but] with my people, those from the North.

“From here to the North is almost about 14 hours. Sitting in the car all day to arrive in the night, only to realise that the following morning we’re not going to vote is so disheartening,” he said.

Mr Samsideen continued: “Looking at it, TESCON is one of the special wings of the New Patriotic Party (NPP). So if only we come here to realise that we’re not going to vote, I’ll say that we’re very much disappointed.”

He added that since TESCON, which is the party’s youthful force has been expunged from the voting, the portfolios which require votes from TESCON delegates should be taken out as well.

Meanwhile, there is currently a sea of delegates on the pitch of the Accra Sports Stadium who have lined up to go through the formalities in order to cast their ballots.

In an exercise that is expected to travel deep into the night, flood lights have been powered to aid the process.

Also, security presence has been heightened at the Stadium to quell any disturbances which may arise.

In all, a total of 6,166 delegates are expected to vote at this year’s Conference.

DISCLAIMER: The Views, Comments, Opinions, Contributions and Statements made by Readers and Contributors on this platform do not necessarily represent the views or policy of Multimedia Group Limited.
Tags:
NPP
TESCON