The ruling New Patriotic Party (NPP) and the opposition National Democratic Congress (NDC), has been urged to trade complementary ideas to help find solutions to the nation’s problems.

This is because the nation’s problems were such that it was not realistic that one party should think it had solutions to them and propagate entrenched ideologies without the other.

The Metropolitan Catholic Archbishop of Cape Coast, Most Rev. Gabriel Palmer-Buckle, who made the call, was speaking at the third Rev. Fr Dr Isidore Kuupole Bonabom Memorial Lecture organised by the Law Students Union of the University of Cape Coast last Monday.

The lecture was instituted in memory of Rev. Fr Isidore who was a lecturer at the Faculty of Law at UCC but died in a tragic road accident in December 2015.

He was said to have a strong passion for issues of human rights, human dignity and social justice in Africa.

This year’s lecture was on the theme: “Freedom and Justice: The Ideals for Enhancing Rule of Law.”

Most Rev. Palmer-Buckle said it was important that the two political parties took away entrenched political ideologies and supported efforts to move the nation’s socio-economic development forward and for the greater good of Ghanaians.

He called for religious tolerance to ensure unity and promote the oneness of purpose for growth.

He also advised the students to be passionate about their interests and sacrifice self-interests for the greater good of the nation. 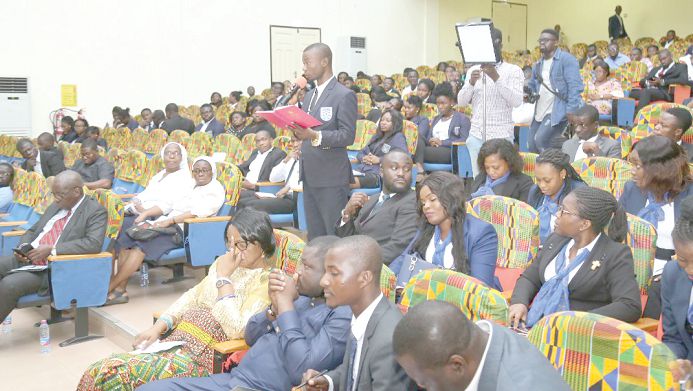 The Minister of Railways Development, Mr Joe Ghartey, in his presentation, said abuses of basic human rights were because people suffered from socio-economic depravation.

He said the country’s walk towards empowering its citizens through policies such as free education would likely guarantee and promote economic, social and cultural rights.

The Minister of Inner Cities and Zongo Development, Dr Mustapha Abdul-Hamid, touching on religion and the law, said religion could not be divorced from the law, adding that laws that undermined religion and culture were absurd.

The President of the Law Students Union of UCC, Mr Alexander Aidoo-Hackman, said the lecture was instituted in memory of Dr Isidore Bonabom because of his cause to humanity and simplicity.