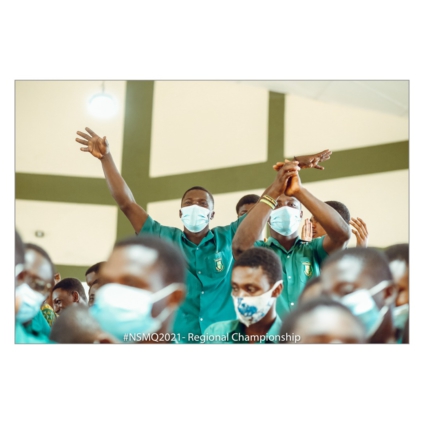 Prempeh College has smashed city rivals, Kumasi High School (KUHIS) and two others, to secure an emphatic qualification to the semi-finals of the maiden edition of the Ashanti Regional Absa Championship of the 2021 National Science & Maths Quiz.

The four-time NSMQ champions, were in top form from the very first round when they secured a 15-point lead ahead of KUHIS, which managed a tie with T.I. AMASS, Fomena at 12 points and Nsutaman Catholic SHS’ 6 points.

The gap was widened in the second round when the Amanfuor doubled their tally, leaving KUHIS, T.I. AMASS and Fomena stalemating at 10 points and Nsutaman maintaining its 6 points.

Ahead of their May 29 contest, Prempeh College promised to beat any school they faced by 80 points or more.

“We will dash [gift] them twenty points and then win by a 50-point margin”, one of the supporters of Prempeh College said after they were drawn in Contest 5 of the championship.

Like a promise delivered with overbearing dominance, the boys from Prempeh College annihilated their rivals by scoring 80-points at the end of the four-round contest. Their supporters could not hide their excitement.

“This is a marvelous win for us, in fact this is the happiest day of my life. PC is the best school in the whole world”, one of them said.

“We were not even expecting this, they have done more than we asked. This year, we’re coming for the trophy, watch out!” another student said.

In the end, the teams from KUHIS, T.I. AMASS, Fomena and Nsutaman Catholic SHS were totally outclassed on the day. Their 23, 23 and 4 points respectively was the evidence that they could barely catch up with the Prempeh team which is definitely on a fifth title hunt.

This win means that Prempeh will be competing in the semis of the Ashanti Regional Absa Championship for a spot in the Grand finale on Monday, May 31, 2021.