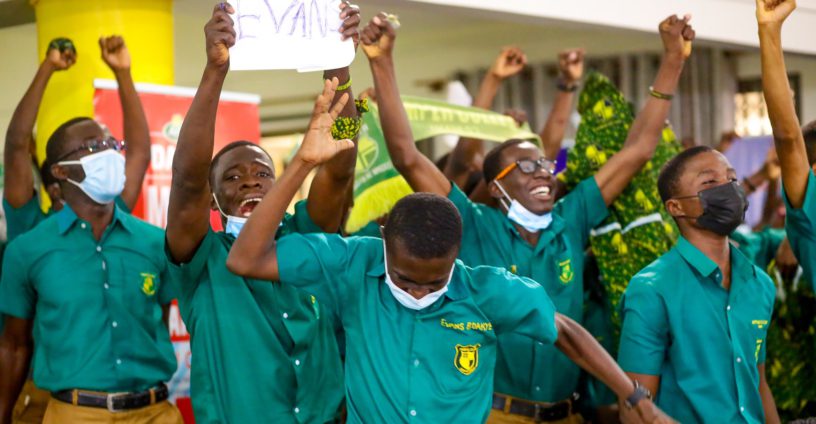 Four-time champions of the National Science and Maths Quiz (NSMQ), Prempeh College, have secured an easy win into the semi-final stage.

Their 67 points were just too huge for either of their opponents to beat at the end of the five-round contest held on Sunday.

Kumasi Anglican SHS accumulated 24 points while Sogakope SHS scored 30 points. The first and third rounds of the race proved tough for all the schools as they waddled to gain maximum points.

Problem of the Day scores –

The ‘Amanfuor’ demonstrated extreme dominance and class throughout as they topped all the rounds in style. Their victory takes them to the next level where they meet regional rivals KNUST SHS in yet another clash.

It was pretty unfortunate that all schools missed out on the Prudential Life NSMQ Star and Goil Riddle Bonanza awards.

Yes! It’s all about the host-and-win campaign and Prempeh will not let down their guard as they prepare to storm the semi-final with mastery and excellent display of intelligence.

The entire auditorium was thrown into a frenzy as Prempeh fans could not hide their excitement, following the victory.

As for Kumasi Anglican and Sogakope SHSs, their only alternative will be to wait until next year’s edition of the national championship. Both schools are seeded; hence, they have automatically qualified to participate in the 2022 NSMQ.

The National Science and Maths Quiz (NSMQ) is produced by Primetime Limited and sponsored by the Ghana Education Service (GES).

It is broadcast by JoyNews and supporting partners.