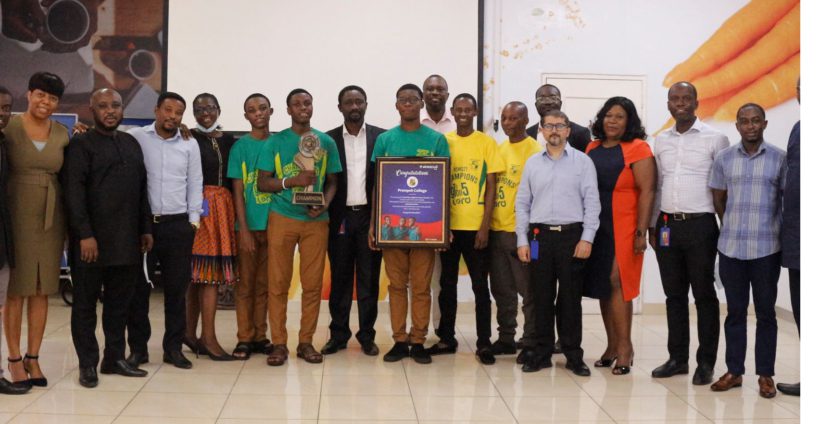 The winners of the 2021 National Science and Maths Quiz (NSMQ) competition, Prempeh College paid a courtesy call to the senior management team and staff of AirtelTigo, sponsor of the “Highest Scorer Award” in the annual the competition.

The purpose of the visit was to provide an opportunity to the reigning champions to share their experiences and the positive impact the competition has had on their lives with AirtelTigo.

AirtelTigo was elated to receive the team that comprised representatives from Prime Time, the Winners, and some teachers from Prempeh College.

Mr. Emmanuel Adjei, Ag. Chief Executive Officer of AirtelTigo praised the contestants for their outstanding performance during the competition.

Presenting a citation to the champions, Mr. Adjei said, “We at AirtelTigo are happy to share in the excitement of your victory as the 2021 NSMQ champions and coming out as the AirtelTigo Highest Scorer from the one-eighth stage to the winning of the competition”.

He also congratulated officials of Prempeh College for their efforts and dedication in raising brilliant contestants to win the championship.

He reiterated AirtelTigo’s commitment to education as one of the pillars of its Corporate Social Responsibility focus with special interest in the promotion of Science and Mathematics studies which are vital tools in various facets of nation-building.

The senior management team at AirtelTigo also used the opportunity to encourage the contestants not relent after winning, but to continue their learning process beyond high school so, they can equip themselves with requisite knowledge, and skills to help transform the country.

Stephen Yankey representative of Primetime, organizers of NSMQ who lead the team noted, “We have enjoyed working with the AirtelTigo team on the NSMQ project and we look forward to more collaborations in the years to come. Once again, thank you, AirtelTigo for the support.”

The teachers and winners from Prempeh College also thanked AirtelTigo for the heartfelt reception and the kind sponsorship from the Telecommunication Company.

The team was given a tour at the AirtelTigo office and interacted with the staff.

They were briefed on the various operations and product offerings which are all consolidated in the shortcode *111#.

AirtelTigo fulfilled its promise by rewarding them with GH¢10,000 for emerging as the AirtelTigo Highest Scorer in the grand finale.