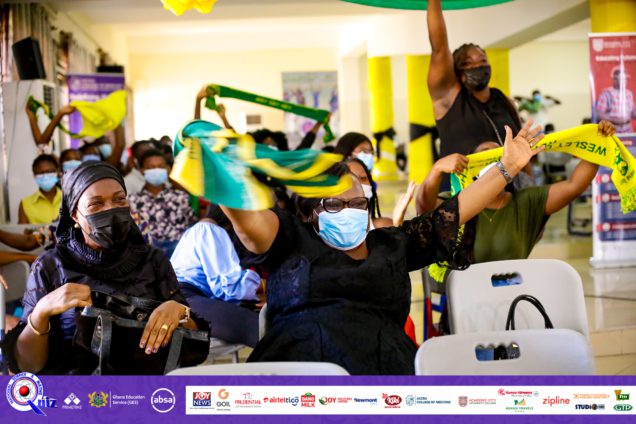 Pope John SHS has been eliminated in the ongoing National Science and Maths Quiz (NSMQ).

The Koforidua-based all-boys school was stopped by Cape Coast’s Wesley Girls’ SHS in the second quarter-final contest for the day.

The tie promised to be a thriller and did not disappoint. ‘Wey Gey Hey’, ‘Pojoss’ and Konongo Odumase SHS all came in firing from Round One to finish and it took Round Three which had the ‘Problem of the Day’ to separate them.

While Wesley Girls’ made a perfect score of 10/10, their contenders could not amass any points.

It seemed like it was done at that point but Pojoss neared an upset in the penultimate round which sent a chill of silence into the auditorium at Kwame Nkrumah University of Science and Technology (KNUST).

After that, it was clear the contest will go to the wires.

The final round saw Pope John SHS close the gap further but their chants were silenced when their hopes of forcing the winner to be decided by a tie-breaker were dashed.

Wesley Girls’ SHS stopped the Quiz Mistress Prof. Kaufmann on the second clue of the last riddle in the final round and pulled ahead of the black and yellow-clad boys.

KOSS and Pojoss would now hope for a better showing in the 2022 competition in which they have earned a seeded spot for making the quarterfinal this year.

Wesley Girls’ School faces Keta SHTS and a yet-to-be-determined school in the semifinal. They are the first all-girls school to qualify into the semis and the only one to do so in so many years.