NSMQ2021: ‘Tell us about your school’ – The dilemma of contestants in regional qualifiers - MyJoyOnline.com

NSMQ2021: ‘Tell us about your school’ – The dilemma of contestants in regional qualifiers 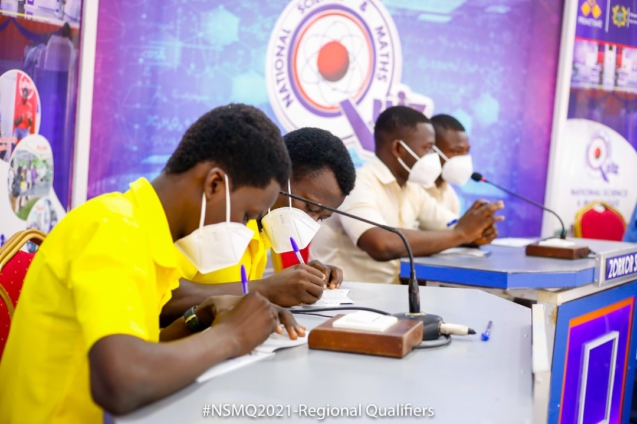 It is supposed to be a nerve relaxing activity for contestants representing their schools in the National Science and Maths Quiz. But what’s meant to be an off-the-cuff engagement between the Quiz Mistress and the contestants on stage could easily become another round of competition that causes upsets, at least for some schools.

After the first week of qualifiers in the Upper West and Upper East Regions, the slips, staggers and sheer blunders in the introduction of schools just could not go unnoticed.

‘Tell us something about your school’, is a pretty simple request which should ordinarily elicit a simple response. Like what students from Bolgatanga SHS gave.

‘Bolgatanga SHS was established in the year 1970. It is located in the Talensi District in the Upper East Region. We go by the motto, to the glory of God and honor of Ghana. And we are the pride of the east’.

Simple right? Well, not so much, at least for the contestants from Zorkor SHS when they come up against Sandema SHTS, Fumbisi SHS and Bawku SHS on the second day of competition in the Upper East Region. As their response will reveal, ‘tell us about your school’ could be really confusing sometimes. Like this time when was meeting Zorkor SHS,

‘Zorkor SHS is a school that [doesn’t] give up easily’. Whatever that meant, it took a follow up questsion from quiz mistress Mrs. Gladys Ode Schwinger to get them to give the location of their school.

But what’s the big deal? Probably a question on the minds of contestants from Sirigu SHS when they had to respond on stage. So, they went for it, or at least attempted to. Only they will freeze in their tracks after they were asked to explain what it meant for their school to be integrated. Once again, thanks to the quiz mistress, they eventually landed safely.

But the contestants from Paga just couldn’t be bothered. For them the name of their school and its location were enough information for anyone who cared.

‘Paga Senior High School is a school in Paga’, they said. And like that, they were done introducing their school. They will go ahead to make only 03 points at the end of their four-round contest.

And somehow, in the Upper East qualifiers, the fewer words the contestants had to say about their school, the fewer points they got at the end of the contest. Well, this is not the result from a scientific study or anything like that. What does it matter anyways? If you don’t agree, start by telling us about your school.