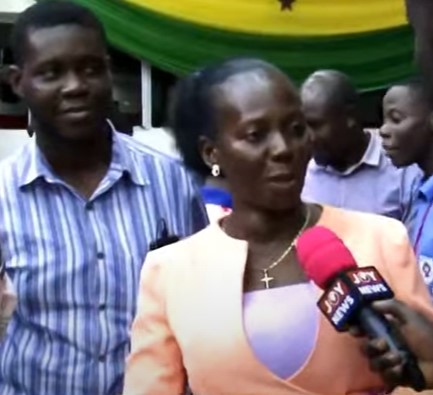 The mother of one of the contestants for the 2022 NSMQ winners, Linda Lartieku-Nsiah is overwhelmed by her son’s performance in the 2022 National Science and Maths contest.

The mother who is also a Pharmacist, recounted how it’s been a dream for her son to participate in the national contest since childhood.

In an interview with JoyNews, she said her son, Alfred Ken-Nsiah, one of the contestants for winners PRESEC Legon in the 2022 NSMQ, prior to gaining admission to the school, watched the contest with his grandmother, a Presbyterian, while he was in basic school.

Her vision, she said, was for her son to be a part of the NSMQ team in PRESEC Legon when he gained admission.

“He entered PRESEC and called back home that there is going to be a series of tests. He called back that by the Grace of God he has been chosen and so we started praying for him, supporting him in every single way that we could and to the Glory of God…it’s really a dream come true for my boy and I cannot imagine his joy,” she narrated to JoyNews’ Maxwell Agbagba.

Alfred recently won the best student in STEM in the 2022 Sharks Quiz.

According to Alfred Ken-Nsiah, he only got to know of PRESEC Legon through the National Science and Maths Quiz which inspired him to participate in the contest.

The father of another contestant for PRESEC Legon, Kojo Anim Tenkorang expressed gratitude to God for how far he brought the contestants.

“I want to give Glory to God and the one who has started good works in his life, he is going to accomplish it to glorify God,” he added.

The boys successfully fought off Prempeh College’s threats of equalling two of their records in one swing.

Their back-to-back record is intact from the Prempeh College threat and they have extended their tally to seven trophies, two more than Prempeh College who were hoping to catch up.

DISCLAIMER: The Views, Comments, Opinions, Contributions and Statements made by Readers and Contributors on this platform do not necessarily represent the views or policy of Multimedia Group Limited.
Tags:
NSMQ 2022
Prempeh College
Presec-Legon