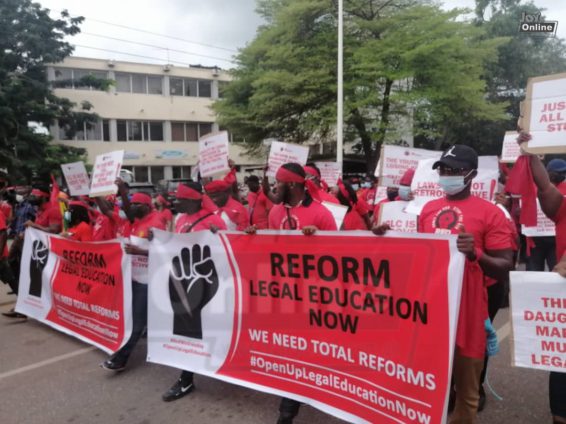 The National Union of Ghana Students (NUGS), has hailed the General Legal Council (GLC) for rescinding an earlier decision not to admit some 499 students into the Ghana Law School.

In a statement issued on November 17, the Union’s Secretary, Julius Kwame Anthony and the Secretary for Societies and Welfare, David Hughes Devereaux jointly expressed their gratitude to the GLC for finally granting access to the students to pursue their legal ambitions.

NUGS also expressed gratitude to the Attorney General and Parliament for their separate efforts in resolving the issue that had been bothering the affecting students for some weeks now.

‘We thank the President of the Republic and the Attorney General for taking prompt action to ensure a timely decision which satisfies all parties. We are particularly grateful to Parliament, especially Members of the Constitutional, Legal and Parliamentary Affairs Committee for responding to our petition and that of the National Association of Law Students by passing the 29th October 2021 resolution, directing the Attorney General to take necessary steps towards the admission of students’, the statement said.

Meanwhile, NUGS wants the General Legal Council to issue clearer modalities that will inform how the 499 students will be able to begin their studies effectively. The Union is further imploring Parliament to expedite action towards the reformation of legal education in the country.

‘While we await the General Legal Council to issue a clear modality for the students to join their colleagues, we urge Parliament to proceed with steps to reform our legal education architecture by seeing through the amendment of Act 32, the Legal Profession’s Act’, the statement added.

NUGS is a national body, charged with the responsibility of seeing to the welfare of all students across the country. On the back of this, the Union has been fighting aggressively over the past few weeks for some 499 students who were denied admission into the Ghana Law School.

According to the General Legal Council, the said students failed to meet the requirements for admission, hence their denial of entry. The students however refuted the decision of the GLC, arguing that they met the required threshold.

This subsequently sparked a series of debates between the students, the GLC, NUGS, the Attorney General and the Parliament of Ghana, as well as other relevant stakeholders.