Odike have issues to settle with EC Chair 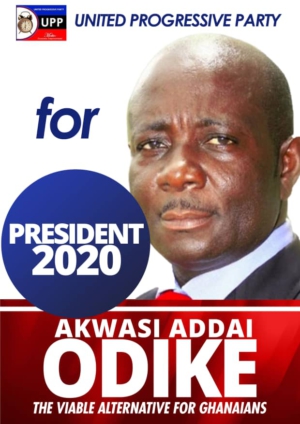 Founder of the United Progressive Party (UPP), Akwasi Addai Odike, says he is peeved at his disqualification to contest as President of Ghana, however, he will not place an injunction on the December 7 polls.

Odike was disqualified from the race on the basis of forging signatures on his nomination forms submitted to the Electoral Commission for processing.

Although he is dissatisfied with the decision of the Electoral Commission, Odike believes placing an injunction on the elections will portray him as unpatriotic.

“I want the country to progress so we get a leader, but we have a lot of unsettled issues with the Electoral Commission,” he told Nana Jantuah on Nhyira Fm’s Kukurantumi programme.

“UPP has not decided yet the party we want to affiliate ourselves with. But for the peace and progress of this nation, I won’t place an injunction on the elections. My lawyers have assured me the ground rules used in disqualifying me by the EC was unfair, so we’ll try the case”.

Odike maintained he has a lot of unsettled issues with the EC Chairperson.

“The accusations of Madam Jean Mensa on me are lies. She is not the law court to determine the authenticity of a signature. Before something can be described as fake unless the court says so or the victim of the falsified documents goes to report,” he said.

“I have referred the case to my lawyers who are working on it. She didn’t want me to contest in this election and I agree, but the details will come out for Ghanaians to see”.

Unlike Akwasi Addai Odike, the United Front Party’s Agyenim Boateng has indicated his readiness to place an injunction on the elections.

DISCLAIMER: The Views, Comments, Opinions, Contributions and Statements made by Readers and Contributors on this platform do not necessarily represent the views or policy of Multimedia Group Limited.
Tags:
Akwasi Addai
Election 2020
Electoral Commission
United Progressive Party