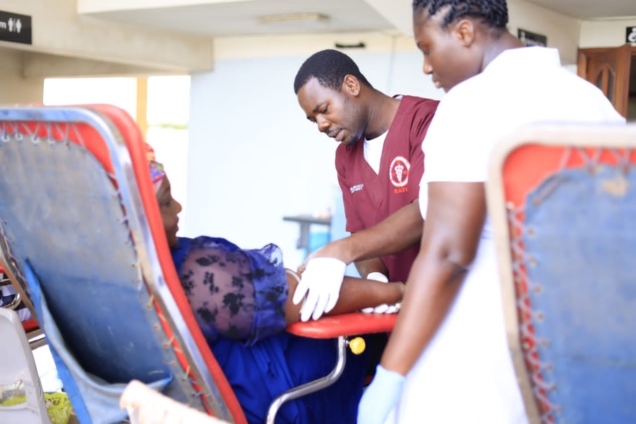 Health officials at the Komfo Anokye Blood Bank are worried over the refusal of the adult population to donate blood.

This, they say, stems from lasting misconceptions associated with blood donation.

Impotence, infertility, and religious beliefs are some misconceptions influencing the decision by many adults in Ghana to donate blood.

With Ashanti Region’s population of 4.8 million, the blood bank says it could only meet half of its annual target of 40,000 pints of blood.

Speaking at a blood donation exercise organized by the Calvary Charismatic Centre in Kumasi, Mr. Asenso Mensah says these attached beliefs are affecting the blood bank.

“Voluntary donation nationwide is not encouraging. The adult population is not willing to donate blood. And, this is pretty worrying and sad.

“Some women are discouraging their husbands from donating blood because they fear they will be rendered impotent. People even blood the blood given is spiritual, so when you’re giving blood, you’re giving out your spirit. Others believe when you donate your blood you will die,” he said.

As part of the yearly activities to mark the birthday of the Head pastor at the Calvary Charismatic Centre (CCC), members are encouraged to donate blood.

The church has for the past 6 years contributed a little over 2,000 pints of blood to shore up the Komfo Anokye Blood Bank.

Head Pastor of Calvary Charismatic Centre, Ransford Obeng says; “I’ve realized most people die out of road accidents in Ghana. When there is an accident, the volume of blood needed to resuscitate the victims is so much. So, I saw this as an opportunity to donate more blood to stock the blood bank. There is still more to be done. I still see this as just a drop in the ocean,” he said.

The health officials advise that people donate voluntarily 3 times in a year.

Sixtieth time donor, Maxwell Anokye says a blood emergence buoyed him up to live healthily so he could make several donations.

“One of my brothers had a medical condition and needed blood, so we tried looking for a donor but we could hardly come by one. And this motivated me to rather live a healthy life so I could donate more to save lives,” he said.