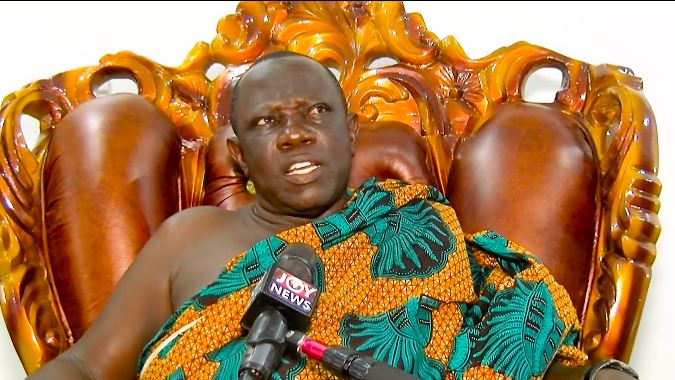 The Chiefs and elders of Offinso in the Ashanti Region are considering taking a firm decision on how to deal with the growing menace of ‘sakawa’ in the area.

According to the Senior Linguist to the Paramount Chief of Offinso, Nana Yaw Kobia Amenfi, discussions with some security heads in the area, on the way forward, have proven futile, hence, the decision.

This comes after a viral video showing some young men in the town publicly displaying flashy cars and boasting of drinking blood.

In the video, the occupants in the car, described as ‘Sakawa’, ritualists, internet fraudsters or scammers, are heard claiming that one cannot be like them unless the person can drink blood.

During a visit to the area, JoyNews’ Erastus Asare Donkor gathered that Offinso is gaining notoriety as an enclave of internet fraudsters, popularly known as Sakawa boys.

Already, there is a public outcry over the suspicious wealth of some youth in the town.

“You will see a very young boy and the car he is riding … there was no such thing here in Offinso, you won’t hear someone is killed here or kidnapped. But today, all we witness here is bloody,” a resident told Erastus.

The residents of the community say they are living in fear, following the recent disappearances of some children in the town.

According to them, two children went missing in the past six months, but one was found murdered, suspecting that the craze for suspicious wealth could be linked to the unexplained murders and disappearances in the town.

Recounting an incident, one of the residents said he saw “six boys with a white coffin, they were in only boxer shorts” he watched them as they passed through the town’s cemetery carrying the coffin.

He concluded that the young rich boys in the area may have been killing people for their wealth, “since they are saying anyone who cannot drink blood cannot join them. It means that’s what they do.”

Responding to the Police reaction to the issues, another resident said “even the elderly get missing, so if your child gets missing and you go to report, it would not amount to anything.”

Although the Police are yet to comment on the matter, JoyNews’ sources say, Police patrols have been intensified in the area.