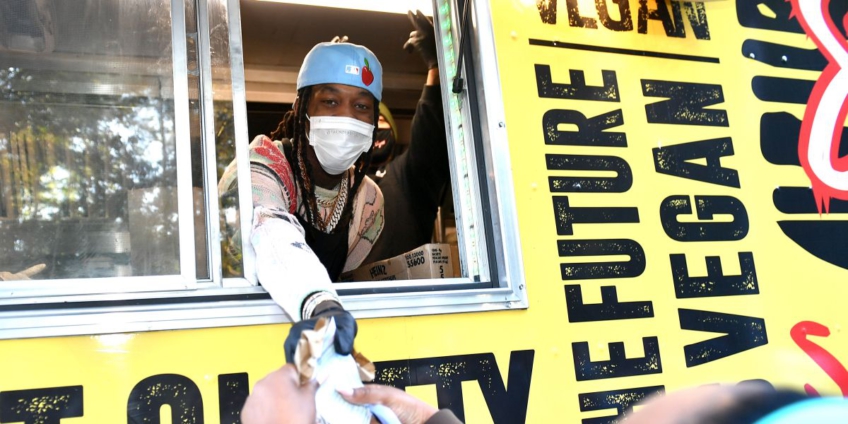 Offset was on the ground to show his support for his fellow Georgians on Election Day.

The Migos rapper teamed up with The Lincoln Project and AXSD Media to provide free food to voters as they waited in long lines to cast their ballot in the election on Tuesday (Nov. 3), according to TMZ.

The 28-year-old and his team traveled to three polling locations in Gwinnett and Fulton counties, in hopes to offer some hometown encouragement to those who might get discouraged with the lengthy voting process.

“Hey, how y’all doing? I want to thank y’all for coming out to this quick little pop-up. It’s all about voting. I’m voting for the first time today,” Set said in a clip obtained by the media outlet.

However, the Republican lead Lincoln Project, a conservative collective who wants to oust the president from the White House, tweeted that there was some sort of problem that seemed to disrespect and impede the efforts.

While details are scarce, it was stated that government officials in Gwinnett county threatened the chart-topping do-gooder.

“We’ve been working in Georgia with @OffsetYRN to feed Gwinnett’s voters in those unnecessarily long lines, but instead of a welcome, he was threatened by @gwinnettgov,” the nonprofit wrote.

“This is what voter intimidation and discrimination looks like.”

Offset reshared their tweet, adding, “@gwinnetgov I was just trying to show some love to the Nawf with @NateJNesbitt on election day smh we got it done anyway & supported a lot of people.”

In late October, Offset took part in a public service announcement where he encouraged people to vote. In the video, he shared how he was misled about his voting rights.

His parole officer had told him that because of a felony conviction at the age of 17, he would not be able to participate in the electoral process.

He looked into the matter years later to discover that he was actually cleared to vote.

“It still could be 10 times better, but you’ve gotta vote. That’s what changes the rules, change the laws. I really felt good voting, because I was told I couldn’t, or I was told I wouldn’t be able to clean up or get away from my past and look where I’m at now,” Set said in the video’s closing.

“I voted and I was able to be a part of where I live which is at home here in America. My voice matters.”

#Offset made it out to vote but ran into issues from GA officials while trying to feed voters at the polls. SWIPE

@gwinnetgov I was just trying to show some love to the Nawf with @NateJNesbitt on election day smh we got it done anyway & supported a lot of people https://t.co/vUJfnrgCxF

DISCLAIMER: The Views, Comments, Opinions, Contributions and Statements made by Readers and Contributors on this platform do not necessarily represent the views or policy of Multimedia Group Limited.
Tags:
Biden
Cardi B
Georgia
Offset
Trump