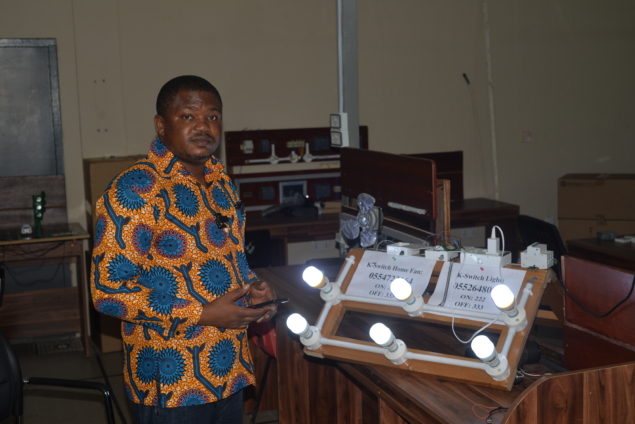 Forgetting to turn off your light or other electrical appliances before leaving the house is a common place.

This has the potential to waste energy and sometimes lead to fire outbreaks.

Fortunately, engineers at the Kwame Nkrumah University of Science and Technology have come out with the KNUST-switch or  K-switch, an automated street and indoor light switching device which is enabled by SMS.

The K-Switch was developed by Ing. John Kusi, an MPhil Power Systems Engineering student and a senior laboratory technician in the Department of Electrical and Electronic Engineering under the College of Engineering, KNUST.

According to Ing. Kusi, the device was initially developed to automatically turn street lights on and off at preset times and the SMS feature of the device enables the overriding of the switch’s on and off times.

Previously, the streetlights were manually controlled which resulted in significant energy wastage.

“Several man-hours were wasted when the switch required someone having to switch the streetlights on and off. K-Switch completely takes away the need for manual switching,” he intimated.

He explained that when the electrical appliance is connected to the K-switch device, one can use the underlisted SMS codes from a mobile phone to regulate the appliance.

The K-Switch device has successfully been piloted on twenty-nine streetlights on the KNUST campus.

The K-Switch device has an added feature of regulating any electrical appliances such as fridge, fan, rice cooker etc.

Prof. Emmanuel Frimpong, Head of the Electrical and Electronics Engineering Department revealed, his outfit has received a grant from the KNUST research fund to scale up the project.

“An additional piloting will also be done in the Kumasi Metropolis and then scaled up nationally to help curb electrical energy wastage translating into money loss,” he stated.

Ing. John Kusi, won the best KNUST Innovative Student award with the K-Switch device at Otumfuo’s Innovation Exhibition organised in April 2019 to mark the 20th Anniversary of the KNUST Chancellor’s ascension to the Asante throne. He also won the most innovative project award at the KNUST Science and Technology Exhibition in May 2022