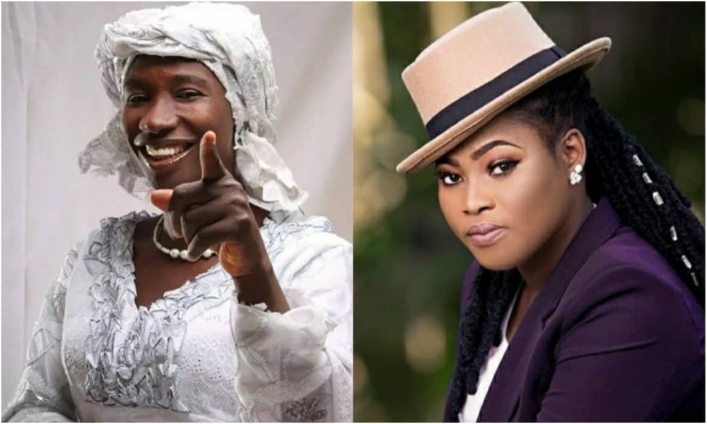 Some persons in the Gospel fraternity are unhappy about the way their colleague Cecilia Marfo delivered a prophecy to singer Joyce Blessing.

In an interview with MzGee, musician Ohemaa Mercy condemned Cecilia Marfo’s mode of communication saying that there are so many ways to deliver a message from God to a person.

Referencing the Bible, the singer said “it will be wonderful to call someone privately and pray with them that helps a lot than standing in this large congregation and talking about it. It’s sad. Sometimes it brings people’s spirit down.”

Ohemaa Mercy urged Joyce Blessing to not dwell so much on what happened but rather focus on prayer.

She stated that it is important the singer prays about the prophecy herself before taking any action.

Her comment comes after Cecilia Marfo at a thanksgiving service interrupted a ministration by Joyce Blessing, seized her microphone and then ordered the band to keep quiet.

The evangelist proceeded to tell the ‘Adam Nana’ hitmaker to forget about her divorce and return to her husband.

According to the self-acclaimed prophetess, Joyce Blessing’s decision to leave her husband does not please God.

Also speaking to MzGee, singer Akwaboah, who had a death prophecy about him shared publicly in 2020, said it is uncomfortable to have such intimate details about a person’s life out in the public.

He explained that just as he was not happy a prophecy about him was said in public, he believes Cecilia Marfo could have spoken privately to Joyce Belssing.

“Yes, you have seen it. Yes, God is speaking to you but what to do is now up to you and how you go about it.”

On the other hand, Celestine Donkor believes no person should have any prophecy about them broadcast to the public – celebrity or not.

She explained that people have a limit to what they can take, what can break them and what can push them into depression.

Thus, it is always safe to deliver prophetic words in private and, most importantly, prayerfully, she said.

Celestine Donkor added that “I have experienced her (Cecilia Marfo) ministry and I know she carries some grace so I don’t doubt who she is. But the only thing I would advise is that she should really apply wisdom when it comes to giving some strong prophetic words to people who come to her church, not only Blessing.”

“For example, if you tell someone they are going to die, that alone is enough to kill the person in two days. Maybe that death could be true and could happen over a year or ten, but because of fear and panic the thought of it alone can kill the person faster.”

DISCLAIMER: The Views, Comments, Opinions, Contributions and Statements made by Readers and Contributors on this platform do not necessarily represent the views or policy of Multimedia Group Limited.
Tags:
Akwaboah
Cecilia Marfo
Celestine Donkor
Joyce Blessing
Ohemaa Mercy