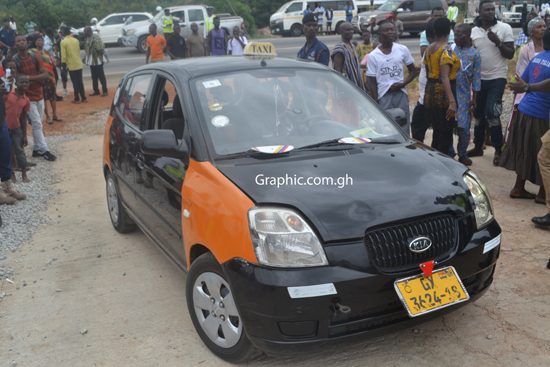 There was drama at Gomoa Okyereko junction in the Gomoa East District Tuesday afternoon when four persons who had allegedly snatched a taxicab with registration number, GX 3624-18 were arrested by police officers few meters away from a ceremony to commission a new police station on the Accra-Cape Coast highway.

The acting Inspector-General of Police (IGP), Mr James Oppong Boanu was at the programme together with other senior police officers to inaugurate the police station which was constructed by the chiefs and people of Gomoa Okyereko.

It was surprising that the ceremony coincided with the commissioning of a police station for the area for law enforcement.

The suspects, Richard Appiah, 26, Augustine Baah, 30, Prosper Amartey, 26, and Alfred Appiah, 23, reportedly snatched the taxi from Dela Mathew, the driver at Winneba junction and were heading towards the Accra direction.

However, upon reaching Gomoa Okyereko junction and realizing that there was heavy security presence around the area due to the commissioning of the police station, the suspects drove into the main town and pushed the driver out of the vehicle.

In an attempt to escape they run the car over the driver’s toes and sped off.

An informant quickly alerted the police officers at the event grounds who upon instruction from their senior officers pursued the suspects while the event was ongoing.

Fortunately, they were able to arrest the suspects who were heading towards Accra and brought them to the event grounds.

When the gathering at the event ground got wind of the information that the suspects had been apprehended, they went into a frenzy, jeered and cheered the police officers for their swift response to the incident which eventually led to the arrest of the culprits.

They commended the officers for their efforts that led to the arrest of the suspects and some of them were heard saying that “this is what we always expect from the police in their fight against crime in this area and across the country”.

Although the police command in the area had wanted to put the suspects behind bars at the district police station, the IGP ordered that they should be put into the cells at the new station which was yet to be officially commissioned.

The IGP’s directive received a thunderous cheer and applause from the hundreds of people who had thronged the venue for the ceremony.

Later, in his address, the acting IGP, Mr Oppong Boanu, commended the officers for their ability to arrest the suspects which confirm the commitment and readiness of the police service to deliver on its mandate.

He said that if the general public always volunteered information just like it happened to lead to the arrest of the suspects, the police would be able to pursue criminals and others with criminal intent to help reduce crime in the country.

Briefing the media after the event, the Public Relations Officer of the Ghana Police Service in the Central Region, DSP Irene Oppong, said that the police had begun investigations into the incident and would accordingly inform the public of any new development.