Ole Gunnar Solskjaer: ‘It is time to ask the question: Is Man Utd boss up to the job?’ 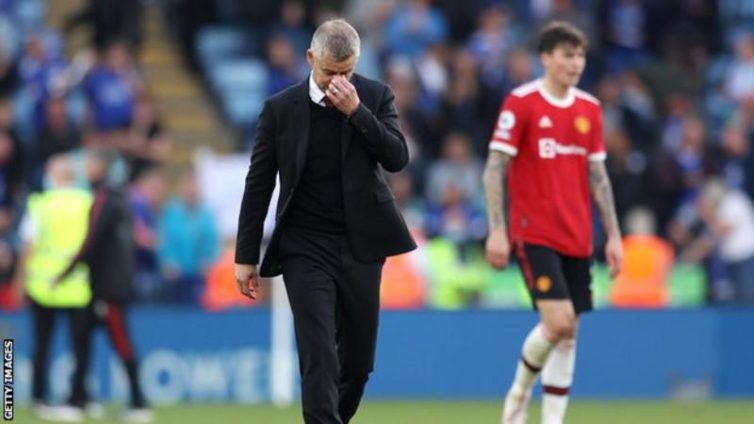 Since taking over in December 2018, Ole Gunnar Solskjaer has lost 33 Premier League matches, drawing 32 and winning 58 - he has won manager of the month just once

Ole Gunnar Solskjaer looked like a manager running only on the fumes of dwindling goodwill as he made his way to Manchester United’s supporters after a shambolic 4-2 defeat at Leicester City.

As the Norwegian moved towards a discontented corner of the stadium to clap the travelling fans, he was faced with some sympathetic applause, anger, and a fair few empty blue seats.

If the impression given by Leicester’s two late goals is one of a close match, ignore it.

Solskjaer can be chippy under criticism but, rather like Manchester United here at Leicester, he has little in the way of any defence after they were over-run and overpowered.

United’s manager looked lost at times in his technical area as Leicester, back to their best, swarmed all over a team assembled at vast expense but one lacking organisation and leadership, panicking and creaking under pressure all afternoon.

As a manager, Solskjaer will take the majority of blame – but some big personalities are in the dock after this game as well. The bottom line, though, is that there is one question more people will ask with increasing validity if United’s poor form continues.

Is Solskjaer the right man to take Manchester United forward?

It is cruel but it cannot be dodged. And the evidence so far is not favourable.

First, though, there must be an exacting spotlight shone on United’s players. This is not all down to Solskjaer.

Harry Maguire, to put it very politely, was ring rusty on his return from a calf strain. He ran the ball out of play with his first touch. He was robbed by Kelechi Iheanacho in the build-up to Youri Tielemans’ strike to make it 1-1 and was part of a defence lacking any sort of composure. He looked well short of match fitness.

Bruno Fernandes spent much of the game complaining to referee Craig Pawson. Nemanja Matic was too slow to cope with Leicester’s midfield while Paul Pogba had one of those frustrating, ineffective matches marked only by persistent fouling that ended with a yellow card.

And the biggest personality of all, Cristiano Ronaldo, was not exempt from this morass of mediocrity. He was on the margins throughout, only getting involved in flashes and unable to turn the tide in the manner of old when it went against United.

It was a grim 90 minutes for United, with Mason Greenwood – who scored a magnificent goal – one of the few who can escape criticism.

Solskjaer is now the man in the eye of the storm. He may have found a few friendly and sympathetic faces among the remaining Manchester United fans when he made a point of walking right up to them at the end but his glorious deeds as a player and admiration for the healing job he did after succeeding Jose Mourinho only goes so far.

One of the cases for Solskjaer’s defence has been a similar points record to the much-celebrated Jurgen Klopp at Liverpool – and the two face each other in a potentially pivotal clash at Old Trafford next Sunday.

In his first 104 games at Liverpool. Klopp won 196 league points, while Solskjaer has claimed 194 in the same time at United. Victory on Saturday would have had him ahead of Klopp’s record.

But the problem for Solskjaer is that the pace gets a lot faster from this point on. In Klopp’s next 123 Premier League games, he won 283 points at an average of 2.30 per game, up from 1.88.

In other words, after an encouraging start, Klopp took Liverpool to the next level.

This United team shows no signs of being anywhere near as good as Klopp’s Liverpool, who won the Champions League in 2019 and the Premier League in 2020.

This places the magnitude of next weekend’s game at Old Trafford into sharp relief. It is huge for United but especially for Solskjaer because he appeared powerless to do anything to stop the match at Leicester from getting away from his team.

Even his double substitution of Scott McTominay and Jesse Lingard for Greenwood and Matic when Leicester went 2-1 up smacked of an act of desperation as opposed to a considered strategy. It had the same whiff of panic that characterised Manchester United’s entire performance.

This has been a poor few weeks for Manchester United and their manager.

After the elation that greeted Ronaldo’s return and his two goals in the 4-1 win against Newcastle United, Solskjaer has overseen defeat by Young Boys in the Champions League, won at West Ham United before losing at home to them in the EFL Cup, went down to Aston Villa at home in the league, and won in the last seconds in Europe against Villarreal before being held at home by Everton.

And then came this shoddy show. It is not taking it too far to suggest United were reduced to a rabble in the closing stages by a rampant Leicester.

There is talent in the squad – just look at a teamsheet containing Luke Shaw, Maguire, Pogba, Ronaldo, Greenwood, Fernandes and Jadon Sancho – but too often it seems United and Solskjaer are simply hoping one of their attacking talents comes up with a moment to win a game or rescue a point rather than executing a clear plan.

It is fly-by-the-seat-of-your-pants stuff. Fingers crossed that a piece of magic can do the job rather than relying on a structure. This falls at the door of the manager.

They will certainly need to do better than this against Liverpool. It will need magic and more given their respective form.

Of course, it is easy to discuss Solskjaer’s future but Manchester United’s hierarchy has never wavered. His assistant Mike Phelan has been given a new contract and more backroom deals are planned. Ole seems firmly at the wheel.

In any case, there is another very pertinent question: Who is actually out there to replace him?

Solskjaer now faces a huge week, with Atalanta at home in the Champions League and then Liverpool, who will have regarded United’s defensive woes here as mouth-watering.

These are testing times indeed for a Manchester United manager still without a trophy and with little indication, he is transforming this expensive squad into title challengers.

DISCLAIMER: The Views, Comments, Opinions, Contributions and Statements made by Readers and Contributors on this platform do not necessarily represent the views or policy of Multimedia Group Limited.
Tags:
Leicester City
Manchester United
Ole Gunnar Solskjaer