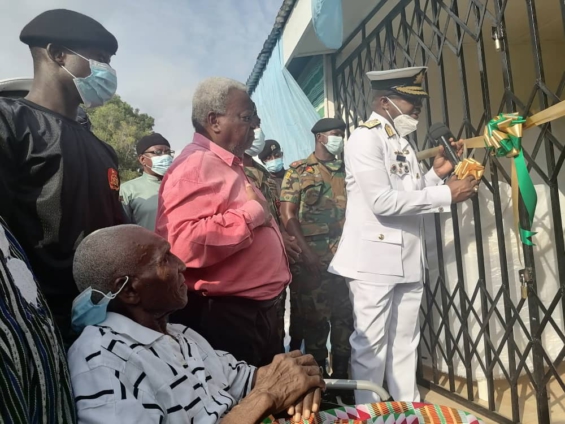 The Chief of Defence Staff Vice Admiral Seth Amoamah, and all other guests present at the gathering, stood up to receive 77-year-old Prince Amartey, the 1972, boxing bronze medalist from the Munich Games.

That is the weight if the achievement made by the retired boxer who also served some years as a Corpoal in the Ghana Armed Forces.

A gathering which also comprised senior officers of the Ghana Armed Forces, Amartey’s family members and representatives of the National Sports Authority (NSA), was to present a symbolic structure of appreciation to the legend for his selfless service to the nation.

A fully-stocked mini mart with everyday essentials and named ‘Amartey Mart’ was handed over to  . Located within the 66 Artillery Regiment or the Volta Barracks to serve as an income generator for the frail former national star who is now confined to a wheelchair.

The presentation is coincided with Samuel Takyi’s decoration with his bronze medal from the Tokyo Olympic Games. We want to use this gesture to appreciate Ex Corporal Prince Amartey who dedicated his life to the service of our nation Ghana.”

According to the CDS, it was rather unfortunate that the legend hardly completed the mandatory 18 years of service to the army to benefit from some of their post service schemes.” He had to do some menial jobs to sustain himself. He was a sweeeper at the YMCA here in Ho,” the CDS told thr gathering.

H.E. Major Amarkai Amarteifio Rtd. The Board Chairman of the Services Loan Scheme noted the work of Ghanaian Times Journalist, Mario Alberto Noretti who brought the plight of the legend to the public’s notice. “A letter was also written by his grand daughter to the Military administration and we attached that to the Mr Noretti s story and submitted it to Ghana Armed Forces administration.

“Over the years, we also did our part to from the GW Amarteifio Fund for Retired Sportsmen where a monthly allowance was given to Mr Prince Amartey.”

“We greatly appreciate all the work of Prince Amartey. During his years he displayed great skill in the ring and made massive impact act as well. He participated in the World Military Games in Rotterdam and the Mexico Olympics before taking part in the 1972 Olympics in Munich Germany,” he added.

According to the Chief of Defence Staff Vice Admiral Seth Amoamah, also indicated that his outfit would supervise the effective running of the shop to ensure the legend benefits fully from the proceeds.

“I am glad that even in his not so good state of health he is able to say thank you. He has seen what has been done and we are glad about this. We will continue to privide support for him because we. Appreciate whatbhe has done for the nation, ” the CDS told Joy Sports.

DISCLAIMER: The Views, Comments, Opinions, Contributions and Statements made by Readers and Contributors on this platform do not necessarily represent the views or policy of Multimedia Group Limited.
Tags:
Prince Amartey