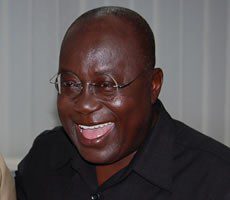 Flagbearer of the opposition New Patriotic Party (NPP) has scoffed at the proposed one-time premium under the National Health Insurance Scheme (NHIS) by government describing it as the “biggest political hoax”.

The one-time premium policy promised by the ruling National Democratic Congress (NDC) in their 2008 manifesto appears to be a limbo barely two months to the end of its four-year term in office.

Authorities of the scheme have indicated their readiness to implement to policy but have attributed the delay to the late approval of the bill by Parliament.

Civil society groups and opposition parties have raised concern about the feasibility of the policy, arguing that its implementation could collapse the NHIS.

But Nana Akufo-Addo, commenting on health issues at the IEA presidential debate in Tamale, blamed the NDC for the challenges facing the scheme.

He indicated that the supposed one-term premium NHIS was a political gimmick by the NDC to win votes.

The NPP flagbearer claimed the “precious” social intervention programme introduced by the erstwhile Kufuor administration has been undermined and demoralized in almost four years under the NDC.

He claimed the scheme has suffered a 21 percent decrease due to mismanagement and misappropriation of funds.

The NPP presidential candidate contended that the decline in membership is a sign of a lack of confidence in the scheme by Ghanaians.

He promised a restoration of confidence in the NHIS by improving service and making it accessible to all in the country if voted as president in the December general elections.

Nana Addo said his government will train health professionals to improve the quality of healthcare delivering in the country.

In a quick rebuttal, President John Mahama disagreed vehemently with the assertions of Nana Addo.

According to him, the NHIS is vibrant under the NDC than ever, suggesting that the NPP leader is being economical with the truth.

President Mahama assured Ghanaians of his commitment to ensure that the NHIS does not collapse under his watch.