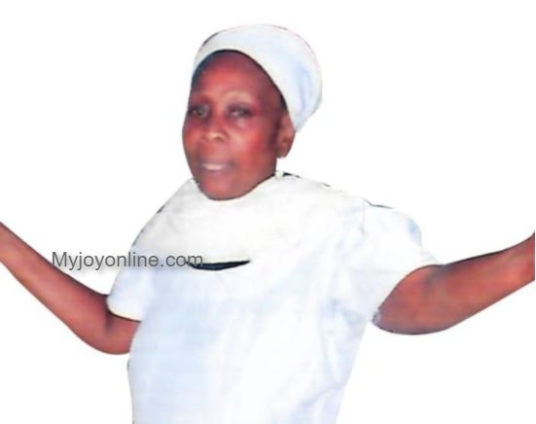 Presiding Prophetess of the Christ First Word Church International at Gomoa Eshiem, Ama Nkansah, who was placed on the wanted list in the case of murder of two-year-old Kwame Adobaw, has been arrested.

The 64-year-old was sent to Asikuma police station by some opinion leaders of Gomoa Ajumako.

Police at Asikuma subsequently detained the suspect to assist with investigations.

Father of the child, Paul Adobaw, was put before the Breman Asikuma Magistrate Court on Monday, May 31, and remanded into Police custody.

The court, presided over by Justice Araba Nunoo, ordered the suspect to reappear on August 31, 2021.

Mother of the deceased has also been granted bail by the police because she is nursing a three-week-old baby.

The couple says the prophetess convinced them that their child, who could neither walk nor talk, was a spirit child and had to be killed.

Narrating the incident, Abubakar Mohammed, a tenant of the couple said at midnight on Monday, May 31, Paul Adobaw, Maame Atta and the fetish priestess dug a grave and buried the two-year-old alive.

Chief of Breman Brakwa, Nana Kofi Hammed, says the community is shocked by the act of the couple and the fetish priestess. Even though they have left the suspects in the hands of the police, some rites ought to be performed, the traditional authorities say.

DISCLAIMER: The Views, Comments, Opinions, Contributions and Statements made by Readers and Contributors on this platform do not necessarily represent the views or policy of Multimedia Group Limited.
Tags:
Arrest
Baby buried alive
Breman Asikuma
Couple
Prophetess