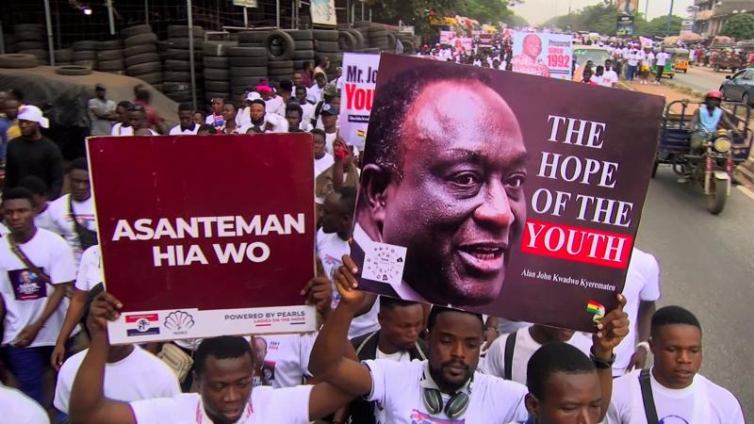 Organisers of the pro-Alan health walk staged in Kumasi are cautioning the newly elected national Organiser of the New Patriotic Party (NPP), Henry Nana Boakye against any decision to suspend Alan Kyerematen for staging the health walk.

The national leadership of the party ordered the group to halt its intended health walk, but the pro-Alan supporters say it is one just to boost their health for the agenda, “ Break the 8”.

One of the organizers, Sledge Bonnah says the health walk, conceived 7 months ago, was organised without the consent of the Trade and Industry Minister.

Speaking to Luv News, he said they are ready to “match him boot for boot”.

“As far as the organizers are concerned, Alan Kyerematen did not give us a pesewa. This is just a health walk. There is no law in the party that stops us from wearing the t-shirt of anybody. After all, Alan Kyerematen is not part of the walk.

“For our national organiser to come on air to say that, if we should continue with this walk, the person in whose name we are staging the walk will be punished, we are daring him to go and punish him. If it had not been for the Ashanti Region, he would not have been a national organiser. Who is Nana B to tell us to stop this walk?,” he cautioned.

He apologized on behalf of the supporters for not heeding their calls to halt the health walk. He indicated plans for the health walk had far advanced and could not be rescinded.

“We apologize to our General Secretary, Justin Kodua. The time he came in asking us to stop, there was nothing that we could do about it. Because the walk was only three days away. When the time comes for nominations, Alan will pick up forms and contest. We believe he is the best person to lead the party now. We are not doing a rally, it is just a health walk,” he said.

The groups numbering close to thirty including the volunteers of Alan cheered on in sensitizing electorates in the Ashanti Region of the coming of the incumbent Trade and Industry Minister.

Former Member of Parliament for the Obuasi Constituency, Edward Ennin is advising the party members to play within the provisions of the constitution of the New Patriotic Party.

He believes dubious and hypocritical actions of some national and regional executives would not help the party’s “Break the Eight” agenda.

“There are some people who think they are more powerful than the party. We queued to put them where they are now. Some persons met with the Vice President and he couldn’t condemn it.