Otumfuo commemorative gold coins launched with praises to the King 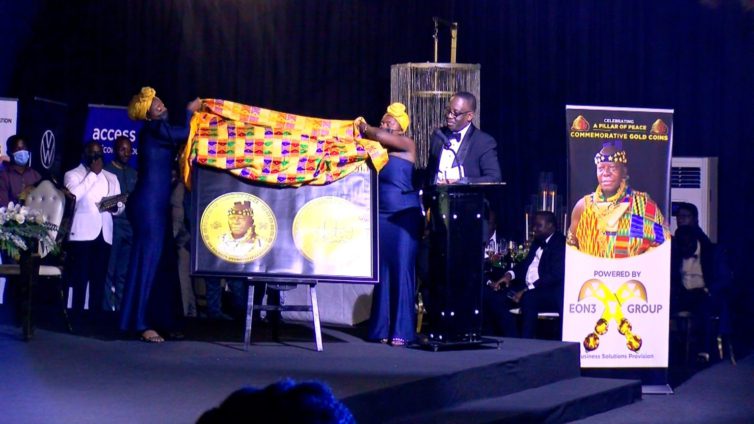 A host of dignitaries on Sunday, December 12, 2021, gathered at the Manhyia Palace to toast to the successes of the Asantehene, Otumfuo Osei Tutu II, especially for his sterling service to humanity.

At the event, 20,000 commemorative gold coins were launched to honour him.

Proceeds from the sale of the coins, which will be auctioned across the globe, will be used for the establishment of a Cultural Resort Centre to promote the customary resolution of conflicts.

This is also to immortalise the credentials of the Asantehene as a national peacemaker, especially, his role in the resolution of the 17-year Dagbon Chieftaincy dispute.

The coins, approved by the Bank of Ghana were minted by the Gold Coast Refinery. The 24-carat fine gold coin, weighing about 31.104 grams with a diameter of 37.00 millimetres, is not for legal transactions.

One side of the gold coin bears the portrait of the Asantehene in the centre, flanked by some ‘Adinkra’ symbols. The images symbolise brokering peace, harmony and reconciliation.

The other side bears the image of the Golden Stool, Sikadwa Kofi, which is the highest symbol of peace in the Ashanti Kingdom.

“Otumfuo Osei Tutu is a pillar of peace, and an asset, not only to Asanteman but the entire nation,” Vice President Bawumia asserted.

He said the King’s influential role in the sustenance of peace in Ghana, especially, under the Fourth Republic, would forever be remembered.

He has actively worked in diverse ways to give peace a meaning, the Vice-President noted, citing how the Asantehene led the Committee of Eminent Chiefs to restore peace to Dagbon after some 17 years of chieftaincy dispute.

Otumfuo Osei Tutu, he stated, has played a remarkable role in helping to shape democratic rule in the country.

The King’s timely interventions through dialogues, he explained, contributed significantly to charting the course for the unity of purpose amongst the various political divides.

“It is really a remarkable story and the country will always be grateful for your efforts. This commemorative coin is a fitting tribute,” the Vice-President stated.

Dr. Ernest Addison, Governor of the Bank of Ghana, in a brief message, commended the Asantehene for his exemplary leadership, saying the Bank is proud to be associated with Otumfuo.

Mr. Alex Dadey, Executive-Chairman of the KGL Group, said the launch of the gold coin is another milestone in the achievements of the Asantehene.

The company, he said, would continue to support the initiatives by the Manhyia Palace designed to offer development to the people.

At the ceremony, KGL Group bought the first coin at one million Ghana Cedis during the auction.

Otumfuo Osei Tutu expressed his gratitude to the Bank of Ghana for its support for the project. He urged Ghanaians to cherish democratic governance because that is the path towards sustainable development and growth.

“The good thing in a democracy is that the people listen, observe and weigh what their leaders do over time and pass their judgement at the appropriate time,” the Asantehene noted.

The programme, supported by the Precious Minerals Marketing Company, was attended by Ministers of State, Members of the Diplomatic Corps, Members of Parliament, Captains of Industry and a cross-section of the society.